The Boston Marathon has been cancelled for the first time in its 124-year history.

Organisers said on Thursday that they instead will have a “virtual event” in which participants who verify that they ran 26.2 miles on their own will receive their finisher’s medal. The race had originally been scheduled for April 20 before being postponed for five months because of the coronavirus pandemic.

“While we cannot bring the world to Boston in September, we plan to bring Boston to the world for a historic 124th Boston Marathon,” said Tom Grilk, the CEO of the Boston Athletic Association.

Although the title of Boston Marathon champion is contested by a few dozen elite athletes, the field includes more than 30,000 recreational and charity runners, with as many as 1 million people lined up along the course trek from Hopkinton to Boston’s Back Bay. That presented organisers with a social distancing problem that won’t be solved by the fall.

The cancellation is the first ever for the race, which began in 1897 when 15 men drew a starting line in the dirt in Ashland and headed for the city to commemorate the first modern Olympic Games the previous year. In 1918, the format was modified to a relay due to World War I; the 2013 race was stopped when two bombs exploded at the finish line, several hours after the winners had finished but while many recreational runners were still on the course. 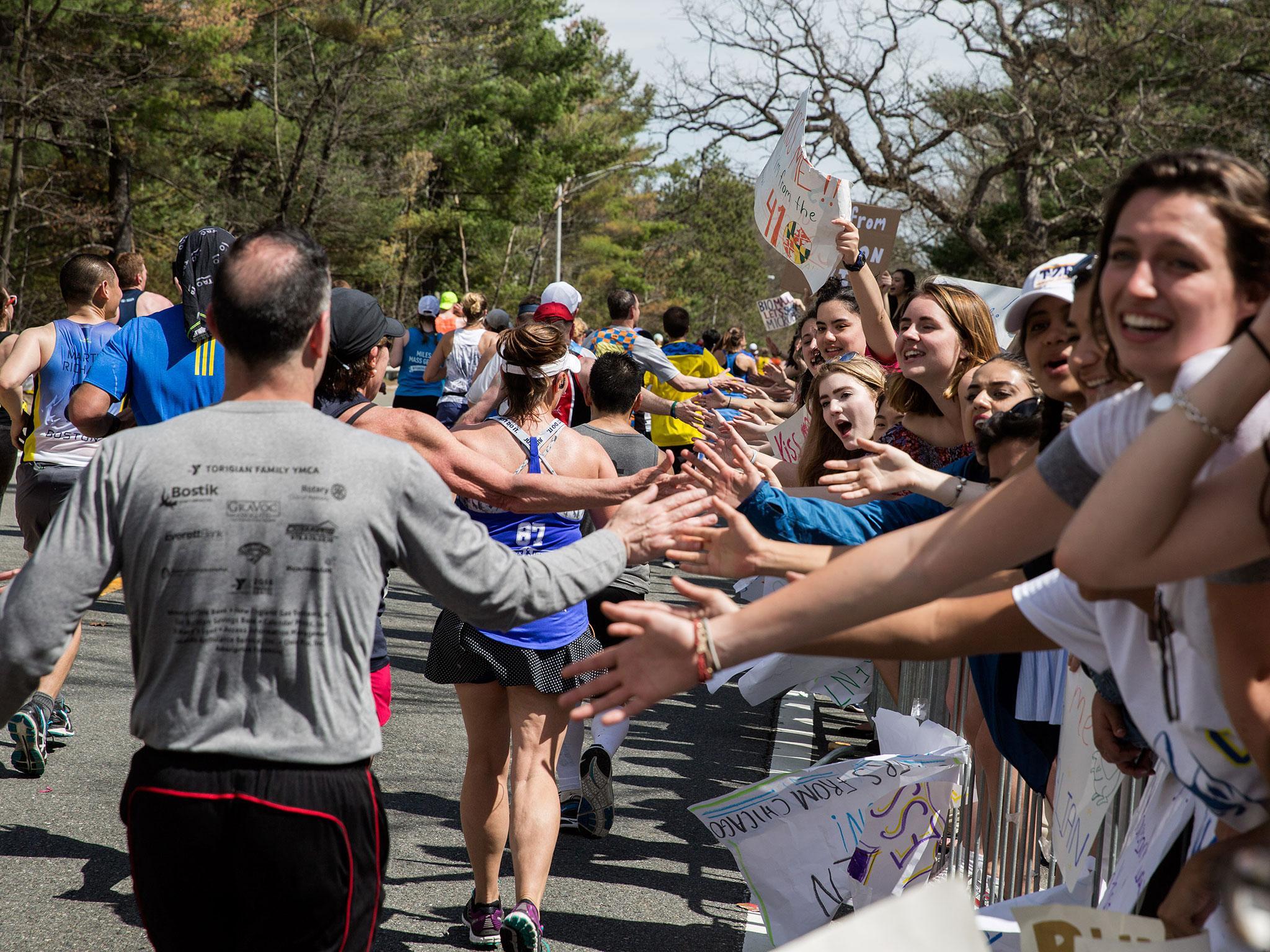 For each of those years, the race was held in April on the state holiday to commemorate the battles in Lexington and Concord that marked the start of the Revolutionary War. Traditionally, the Red Sox have scheduled their first pitch for the morning so baseball fans could wander over to Kenmore Square after the game to see the runners pass by with one mile to go.

In March, when the race was postponed to Sept. 14, Mayor Marty Walsh cited the desire to salvage the estimated $211 million pumped into the city’s economy each year. The Boston Athletic Association and marathon runners also raise about $40 million for charity.

Walsh said at the time that there was no thought of excluding the tens of thousands of amateur runners who consider running Boston a bucket list achievement. The Tokyo Marathon went on as scheduled in March with just over 200 elite runners but not the 38,000 recreational runners who had signed up; spectators at the Los Angeles Marathon were advised to practice social distancing.

Kenyan Daniel Wanjiru, winner of the 2017 London Marathon, has been provisionally suspended by the Athletics Integrity Unit.

On Tuesday, the AIU website confirmed that a charge has been issued for “use of a prohibited substance/method”.

The 27-year-old cannot participate in any competition until a hearing has taken place.

Wanjiru also won the 2016 Amsterdam Marathon and has finished eighth and 11th in the past two years in London.

World Athletics president Sebastian Coe is still hoping that a belated outdoor athletics season can be staged from August to October this year, he said on Friday.

Like all sport around the world, athletics is at a standstill because of the coronavirus pandemic with little indication of when it will be able to resume.

“We know that different countries are at different stages of managing this pandemic so we are trying to give a structure to our athletes and member federations so they can begin to plan for the year ahead,” Coe said in a World Athletics statement.

“If it is at all possible, we will schedule a belated outdoor season from August to October to help our athletes to figure out where they stand after the disruption of this year.”

World Athletics has set aside the weekend of 9-10 August as the protected window for national championships.

“This will be followed by what we hope will be a solid international season, but of course we are dependent on the global response to the pandemic,” Coe said. “Nevertheless, we think it’s better to offer our stakeholders some hope of a return to normalcy later this year.

The Olympic Games have been postponed by a year until July-August 2021 and the world athletics championships, due to be held in Oregon in 2021, have been put back to 2022 to avoid a clash between the events.

The world indoor athletics championships, due to have taken place in Nanjing, China, in March have been postponed for a year while the London, Paris and Barcelona marathons were also called off.

The Diamond League postponed its first five meetings of the 2020 season due to be held in April and May in Qatar, China, Stockholm, Naples and Rabat. Five more meetings due to be held in June and July are still listed as going ahead, although they are also in serious in doubt.

World Athletics said an another announcement about the year’s schedule was expected towards the end of the month.

The Tokyo Olympics will take place between July 23 and August 8 next year.

The International Olympic Committee confirmed the news on Monday, which followed a meeting of the Tokyo 2020 organising committee.

On making the announcement, Tokyo organisers confirmed that the opening ceremony will take place on July 23 2021 – almost exactly one year after the games were due to start this year.

A decision to postpone the Olympic and Paralympic Games was taken last week by the IOC and the Japanese government because of the accelerating threat posed by the coronavirus pandemic.

A statement from the IOC also confirmed the new dates for the Paralympic Games, which will now take place from August 24 to September 5.

IOC president Thomas Bach said: “I want to thank the International Federations for their unanimous support and the Continental Associations of National Olympic Committees for the great partnership and their support in the consultation process over the last few days.

"I would also like to thank the IOC Athletes’ Commission, with whom we have been in constant contact.

"With this announcement, I am confident that, working together with the Tokyo 2020 Organising Committee, the Tokyo Metropolitan Government, the Japanese Government and all our stakeholders, we can master this unprecedented challenge. Humankind currently finds itself in a dark tunnel.

"These Olympic Games Tokyo 2020 can be a light at the end of this tunnel.”

The announcement came after Sebastian Coe told of his relief at the Olympics being postponed – as it will ensure athletes stay on the right side of the law.

World Athletics boss Coe pushed for a delay in sport’s greatest show before the decision was finally taken by Olympic chiefs last week.

The architect of London 2012 admitted that saving competitors from “mental turmoil” had been a key consideration.

Sebastian Coe has told of his relief at the Olympics being postponed – as it will ensure athletes stay on the right side of the law.

World Athletics boss Coe pushed for a delay in sport’s greatest show before the decision was finally taken by Olympic chiefs last week.

The architect of London 2012 admitted that saving competitors from “mental turmoil” had been a key consideration.

"We didn't want to have the athletes in a position where they were countering government advice, maybe even breaking the law," said the Lord of the Rings.

"And of course in the back of their minds was always that concern, it wasn't just their own training programme, but that they ran the risk of effectively infecting themselves, their families, their kids, grandparents or parents.

“We just wanted to take them out of that mental turmoil as quickly as we possibly could.

"We're no different from everyone else out there,” Coe told TalkSPORT. “But I think we just concluded that sport, on this occasion, had to take a back seat."

Following confirmation on Friday by Coe that athletes already qualified will keep their spots for the rescheduled Games next year, Japan's national broadcaster NHK revealed that the 2021 dates for the opening and closing ceremony are set to be confirmed for July 23 and August 8.

Coates said: "I hope that Dina (Asher-Smith) wins. I believe she will and we want her to.

"But it's about her story, her journey in athletics and what athletics can bring to anybody that participates. That's what it should be about."

This website uses cookies to improve your user experience and to provide you with advertisements that are relevant to your interests. By continuing to browse the site you are agreeing to our use of cookies.Ok