In the company of her son’s two pet dogs, Nill Kyrgios sat inside the family’s Canberra home on Monday night watching fellow Aussie Alex de Minaur race out to a two-set lead in the final 16 at Wimbledon.

Nick, warming up on the court next door for his fourth round showdown against 20-year-old American Brandon Nakashima, was about to take centre stage. 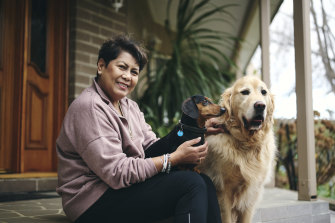 “Then I went to bed,” Kyrgios told the Herald and The Age.

“I haven’t watched him play for a while, actually. I can’t expose myself to that anxiety. I go into a really strange panic. Over the years, I’ve been through a lot.

“It actually got to a stage where I sought help. I was seeing a psychologist for six months. I was not in a good place. My anxiety level watching Nick was so high.”

With husband George and daughter Halimah sitting with Nick’s entourage inside the Wimbledon player box, Kyrgios lay in bed and waited by her phone. 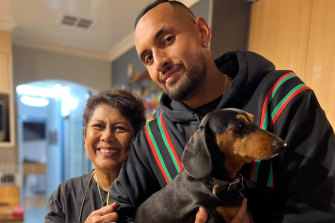 Nill Kyrgios with her son Nick during his recent 27th birthday celebrations at their family home in Canberra.

“Do I check the score?” she asked herself. “The problem is I don’t want to know, but I want to know. I kept thinking ‘do I check or not?’.

“I was just waiting for someone to message me. As soon as it came through, there was just relief.”

The Herald and The Age spoke with Kyrgios on Tuesday afternoon, before the news broke on Tuesday night that her son will face court following accusations of common assault of his ex-girlfriend Chiara Passari.

Nick shares a special bond with his mother. A large part of the reason he quit the tennis tour during two years of COVID lockdowns was an unwillingness to leave her side. 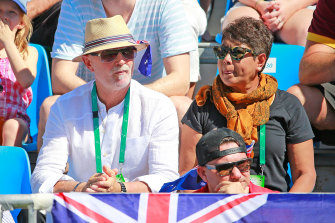 Nick Kyrgios’ parents George and Nill watch their son during the 2015 Davis Cup tie in Darwin. Nill now struggles to watch her son play tennis due to anxiety.Credit:Getty

Being away for the death of his grandmother Julianah Foster, who died at 74 just days after Nick’s 2014 giant-killing run at Wimbledon, acts as a constant reminder of the toll of a life on the road.

It’s why, when in recent years his mother’s kidneys begun to fail her, Nick struggled to leave her side.

“My kidneys are reaching very close to the end of their life,” Nill said. “But I can’t do anything about it. I’ve already booked one from my husband, George, so I’m hoping he’s compatible.

“He said I can work with one and you can work with one. It is what it is. There are people who have bigger problems than me. Nick is worried. He’s always thinking if I’m going to be all right.” 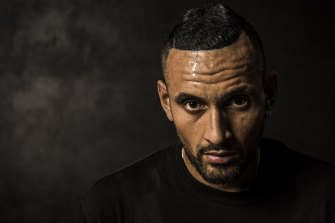 Nick Kyrgios poses for a photo before he flew off to Wimbledon last month.Credit:Steven Siewert

As concerned as Nick is for his mother, it paled into insignificance next to the concern she had for her son, whose life was once spiralling dangerously out of control right in front of her.

Nick, who with a win against Chilean world No.43 Cristian Garin on Wednesday night will probably set up a mouthwatering semi-final against the all-conquering Rafael Nadal, has spoken openly about his mental health deterioration and battle with depression.

He told the Herald at the end of 2020 that he couldn’t fathom the idea of playing the sport that had catapulted him into superstardom.

“I couldn’t look at a tennis court,” Nick said at the time. “I had no happy feelings. I had no desire to be out there. I had no motivation.” 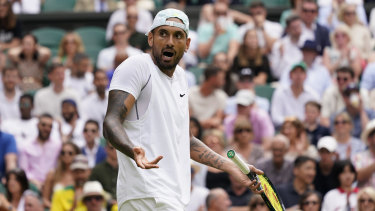 Nick Kyrgios during his fourth-round match against Brandon Nakashima.Credit:AP

He turned to alcohol and drugs. His mother feared the worst.

“I’ve seen him in very dark times,” Nill said from her Canberra home. “I’ve seen it firsthand. I was worried sick that he was going to do something to himself. You’re left with that feeling as a parent that you can fix everything, but you can’t.

“The drinking and trying different things. The drinking part really got me. I remember talking to him recently and said ‘remember that time in Stuttgart you were drinking in the cafeteria’?

“And that story he told the other night about his manager having to fetch him at 4 o’clock in the morning: that’s true. We didn’t know where he was. We said ‘John (former agent John Morris), he has to play tomorrow, where is he?’.” 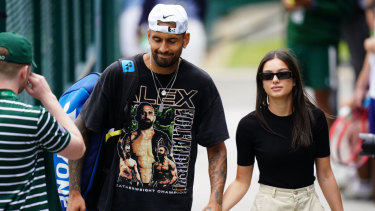 Despite constant criticism of his on-court antics, those who know Nick the most say he’s the happiest they’ve ever seen him.

He’s found love with girlfriend Costeen Hatzi, who his mum says brings the best out in her son. And whether he goes on to win Wimbledon or crashes and burns in the next round, it’s irrelevant to his overall health.

“He’s in such a better place. He’s accepting things as they are. I’m super, super relieved. I’m happy now because he’s finally happy. Whether I’m there or not, it doesn’t matter. The others are there with him. I’m okay knowing that he’s okay.”

Nick’s constant concern over his mother’s health relates to a trauma he suffered at a young age.

Laying next to his mother in bed, a four-year-old Nick woke to the shock of his mother experiencing a seizure that would later be diagnosed as an autoimmune disease known as eosinophilia.

“He found me in the bed when he was four years old,” Kyrgios said.

“I was having a fit. For a child to see their mum like that … he was the only one in the bed with me. It freaked him out so bad. He was sleeping next to me. It was my first fit.

The condition means Nill has a white blood cell count 12 times higher than the average person.

“White blood cells you use to fight infection or when you’re sick, but for me it’s trying to fight bacteria that’s not there so in theory my body fights itself,” she said.

“It’s why a lot of my organs have been damaged. It’s why Nick is scared for me to be on my own.