There was a famous photo before last year’s delayed Tokyo Olympics in which Novak Djokovic poses with a group of Belgian gymnasts. He’s stretched out on a yoga mat, holding an elongated pose doing the splits. Nadia Comaneci felt compelled to thumb social media congratulations to him on his form, and many wondered if he’d ever had the urge to dump cross-court passes for the pommel horse.

For a man whose will to win singles tournaments and become the greatest player of all time knows no limits, he clearly enjoys being in a team environment and the shift from the banality of the regular circuit.

But as impressive as Djokovic’s feats of flexibility were, not even he has been able to bend around the red tape that has dogged him for a second Australian summer, albeit this time he has been allowed to stay in the country.

The United Cup starts on Thursday. It is Australia’s shiny new event, a beefed-up Hopman Cup if you like, a window into sport of the future. Men and women are competing on the same teams. They’ve been lured by millions of dollars in prizemoney and appearance fees, plus rankings points. The tournament wanted stars, and largely got them.

Rafael Nadal roamed a cavernous Sydney Olympic Park on Wednesday. Petra Kvitova is in town. World No.1 Iga Swiatek is in Brisbane; Greece’s cult hero Stefanos Tsitsipas in Perth. Nick Kyrgios was supposed to play until his withdrawal was announced on Wednesday, minutes before he was due to front a press conference with Australian teammates, including those who plough away without him in the Davis Cup.

But Djokovic? He slipped into Adelaide on Tuesday night, almost 12 months since he was deported over the visa saga and his refusal to be vaccinated against COVID-19.

The reason he will play his first tournament in the city of churches, and not as a headline act of the inaugural United Cup, is because of more bureaucracy.

When the entries needed to be taken for the United Cup in October, Djokovic still hadn’t had government approval to return to Australia. It meant tournament officials couldn’t offer Djokovic, and by extension his country Serbia, an immediate spot in the 18-team event.

Some of the world’s highest-ranked men and women were offered the chance to spearhead the United Cup. For example, Nadal said yes, and Spain were given a spot with a captain of his choosing. Swiatek was in, and so Poland were. And on it went.

But given he was no guarantee to even be allowed back in the country a few months ago, Djokovic couldn’t be certain of a United Cup spot. He’ll kick off another season in Adelaide before heading to Melbourne. The last night he spent there was in a modest hotel turned immigration detention centre. 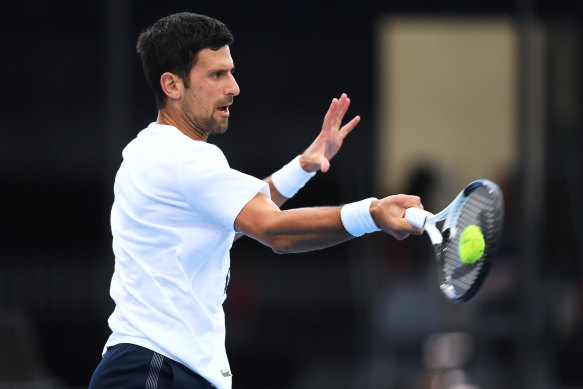 Novak Djokovic warming up in Adelaide on Wednesday.Credit:Getty

News of his arrival was well received by his peers in Sydney as he prepares to chase a 10th Australian Open title at Melbourne Park next month. If anyone had reason to hope Djokovic wouldn’t return to his favourite playground, it was Nadal. The Spanish veteran is one ahead of Djokovic on the all-time grand slam list. The smart money is on the Serbian drawing level by the end of the AO.

Djokovic has usually been that in Australia. The country, and the rest of the world, has largely moved beyond vaccine mandates. But it doesn’t mean last year’s Djokovic saga won’t loom over the next few weeks.

“It was a big issue last year, of course,” Kvitova said. “People probably don’t know the inside [story] of what happened last year. But it’s great he’s back here playing because of the great player he is. I think it’s great for tennis he’s back in the big competitions. It’s great to have the best.”

How will the fans react to him? Djokovic is a polarising figure at the best of times, long before the vaccine firestorm. His raucous Serbian disciples will be out in force, but the Australian public is still scarred by tortuous lockdowns, which will be the barometer.

“I have a great deal of confidence in the Australian public,” Tennis Australia chief executive Craig Tiley said on Tuesday. “We’re a very well-educated sporting public, particularly those who come to tennis.

Watch the United Cup live and free on the 9Network – Channel 9 and 9Gem. Every match will be available live on 9Now.