He can't leave his room to do anything, not even train, and now he has to prepare for a grand slam in isolation. 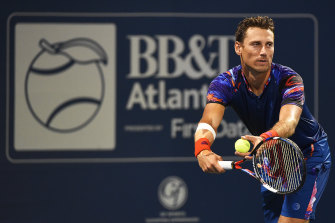 Artem Sitak is in hard lockdown in hotel quarantine.Credit:Getty Images

While a handful of players in his situation have complained they did not know they would need to isolate if someone on their flight tested positive, Sitak said most of his peers don't mind doing what's required by the government to play.

"That's what makes the news when somebody complains, and the whole image is that," Sitak said.

"But I think most tennis players are happy to do what they need to do to play. We were aware of the risks before coming in so that is how it is.

"Australia is very strict to try to keep zero cases."

Sitak made headlines on Sunday when he said players had definitely been told everyone would need to do hard hotel lockdown if a person on their flight was positive, even though the flights were socially distanced into zones.

"I was so surprised also that my video got so much attention," he said.

The 34-year-old Russian-born New Zealander, who is ranked No.78 in the world for doubles, said he has plenty of friends and family to talk to while locked down.

He also has a plan to stay in shape during his time in the hotel.

He will train for three hours non-stop from 3pm to 6pm every day, because that will mimic the time he could be on court when the Australian Open begins.

"Hopefully that will keep me somewhat in shape," he said.

Some 45 minutes of that will be at high intensity on an exercise bike in his room so "I sweat a lot on that one, that is a good sign of a good workout".

"I have a bosu ball [balance ball], a bunch of bands and rollers. I am going to do a lot of stuff, everything is planned out.

Unlike many of his peers, who have shared videos on social media hitting balls into upturned mattresses, windows and walls, Sitak won't hit balls.

"I will do racquet swing imitations with two racquets so it makes it heavier, so the muscles remember the swing. It's the best I can do in these circumstances," he said.

Outside of that there's a lot of free time for Sitak to relax.

He has a "big book" to read (How To Change Your Mind – The New Science of Psychedelics by Michael Pollan), is studying an online corporate finance course and will play games on his Nintendo Switch.

"There's always Netflix too," he said.