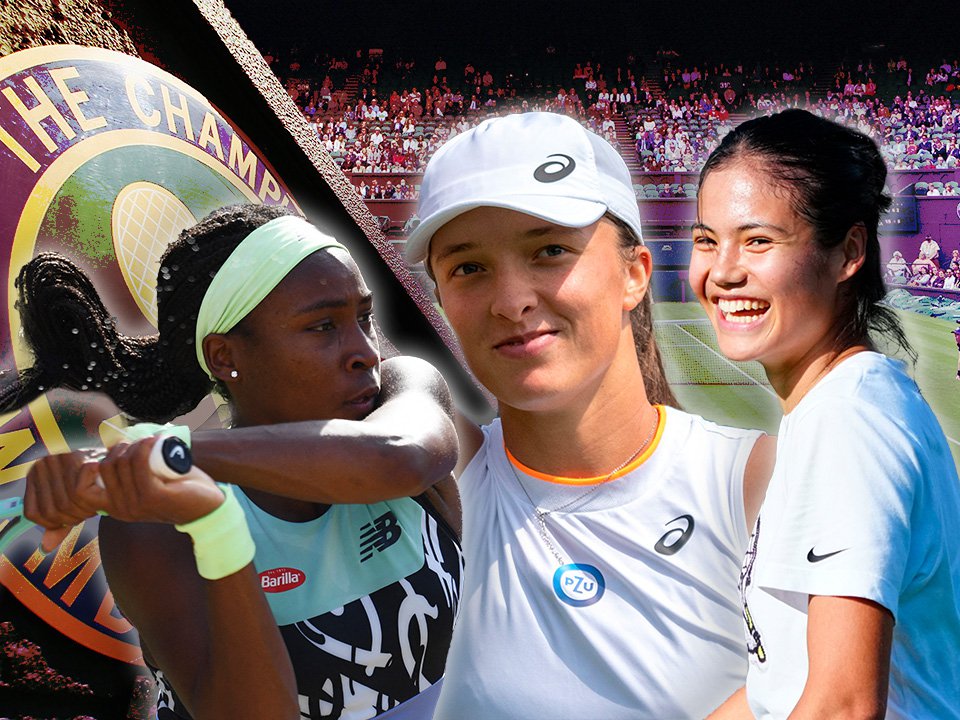 Forget the lack of ranking points, the women’s singles draw at Wimbledon 2022 promises to be one of the most exciting yet with no clear winner expected.

Australian Ashleigh Barty will not be defending her 2021 title following her retirement from tennis in March – and with the 2020 Championships canceled due to the coronavirus pandemic – world No 20 Simona Halep is the most recent winner present, following her victory three years ago.

Katie Boulter, Jodie Burrage, Heather Watson, Lily Miyazaki, Katie Swan and Sonay Kartal are among the British contingent handed wildcards, but here are six other players to watch out for at SW19 this year…

There are very few sportspeople in the world who can compare to the great Serena Williams and what she has given to women’s tennis. Comparable to the likes of Tom Brady in the NFL, Tiger Woods in golf and Lewis Hamilton in Formula One – she is the sport’s modern-day GOAT.

As usual, all eyes will be on the 40-year-old this year. The seven-time Wimbledon champion has been handed a wildcard to compete at the Championships, but what she will be capable of this time around is something of an unknown as she hasn’t played professionally since SW19 in 2021.

With 23 Grand Slam titles to her name, it would be ridiculous to write her off, but last year’s showing wasn’t exactly memorable – she severely injured her leg in the opening round against Aliaksandra Sasnovich in the first set – forcing her withdrawal from the tournament.

Due to her lack of playing time she has fallen to No 1,208 in the world, but she got the chance to get back in the swing of things by playing at Eastbourne this week. ‘[I am excited] to be back on the grass – a surface that has been so good to me throughout my career,’ she explained.

Is Williams the same player who dominated Wimbledon in the 2000s? Probably not. But does she have a point to prove after her disappointment here in 2021? Probably yes. After all, she is one Grand Slam triumph away from equalling the great Margaret Court’s record of 24 titles.

Following her history-making heroics at the 2021 US Open, where she ended Great Britain’s 44-year wait for a women’s Grand Slam singles champion at the age of 18, British fans – and tennis fans in general – have expected bigger and better things from new star Emma Raducanu.

It hasn’t exactly gone to plan since, however. Coaches have come and gone, she has suffered some poor defeats and has not been playing her best tennis – which she showcased in her fairytale run at Flushing Meadows. But this is a player who undoubtedly has a massive future in the game.

It’s hard to know what to expect from Raducanu at Wimbledon this year. We all know she possesses the talent to win another Grand Slam, but she is young, lacks consistency and has a long way to go until she is regularly challenging for titles. Importantly, though, she is comfortable with that.

‘After winning the US Open, everyone just expected me to win every single tournament I was ever going to play again,’ the world No 11 said in a recent interview with her sponsor Nike. ‘I think it’s a bit unrealistic because perfection just doesn’t exist.’

Raducanu is Britain’s best chance of winning a Wimbledon singles title this year, but she is struggling with injury, so it feels an unfair expectation. The 19-year-old was forced to pull out of the Nottingham Open earlier in the month, hobbling off in the first round against Viktorija Golubic, and missed the standard Wimbledon warm-up event in Eastbourne.

Some have tipped Coco Gauff as the new Serena Williams. Her fourth-round run at the age of just 15 at the 2019 Championships was nothing short of remarkable as the American became the youngest player in Wimbledon history to qualify for the main draw, becoming a household name in the United States.

Gauff has since gone on to win two WTA Tour titles, coming on two different surfaces. Not too long after Wimbledon she won the hard-court Linz Open in Austria – a WTA International Tournaments event – beating former Grand Slam champion Jelena Ostapenko in the final.

The next came in 2021 when she lifted the WTA 250 Emilia-Romagna Open in Italy, won on clay, defeating Wang Qiang in straight sets. Most recently, she enjoyed her first run to a Grand Slam final, reaching the showpiece at Roland Garros, but lost to current world No 1 Iga Swiatek.

‘Hopefully this is the first of many [Grand Slam finals],’ the world No 13 said after that match. The transition from the slower clay courts to the fast-paced grass is notoriously difficult, but as the 18-year-old showed three years ago, she is more than capable of springing a few surprises.

Karolina Pliskova is an interesting one to keep an eye on at the 2022 Championships. Though she has won titles across all surfaces, her aggressive and fast style of play undoubtedly makes her a force on the grass. She’s won three lawn tournaments on the WTA Tour, all in England.

The former world No 1 reached the Wimbledon final as an eighth seed last year – beating second seed Aryna Sabalenka in the last four – and only losing out to top seed Ashleigh Barty in a close match. That was her second Grand Slam final after the 2016 US Open, so perhaps it will be third time lucky for the Czech.

Pliskova struggled at the start of 2022, mostly due to a hand injury, but has shown some improvement in recent weeks and the 30-year-old now sits at No 7 in the world rankings.

Though perhaps more suited to clay and hard courts, it would be negligent not to include current world No 1 – and top seed – Iga Swiatek on this list as she attempts to win the Channel Slam following her heroics at the French Open, picking up her second Roland Garros title after her 2020 victory.

The Polish sensation has never won a WTA Tour title on grass, with nine coming on the other two surfaces, but she is young at the age of 21 and can still improve. Her best run at Wimbledon came last year when she reached the fourth round, losing out to Ons Jabeur.

She has been on an incredible run in 2022, drawing high praise from Rafa Nadal last month, who said: ‘She’s doing amazing things. Playing amazing and winning every single event she [has] played, I think [her] last four in a row.

‘Winning Indian Wells and Miami in a row, [that is] something difficult. [I am] just happy for her. She’s [a] very spontaneous and natural girl. It’s good to have girls like this, good people like her having success.’

Another former world No 1 to watch out for at Wimbledon is 34-year-old defensive baseliner Angelique Kerber. The three-time Grand Slam winner was a champion here back in 2018, but has struggled with inconsistencies – and illness – since, now sitting as world No 18.

Interestingly, she lifted her 14th WTA Tour title on the clay-court Internationaux de Strasbourg last month, suggesting a return to form. However, she has previously revealed grass is her favourite surface to play.

‘To be honest, I felt very comfortable right from the beginning [on grass courts],’ she told the WTA website back in 2020. ‘Because I always enjoyed playing on carpet courts, which are quite similar.

‘It suits my game really well, as the ball bounce is low and fast, which forces you to react quickly, anticipate and be creative. I have had the privilege to collect so many beautiful memories on grass courts.

‘The quarter-final match against Sabine Lisicki in 2012 is one that stands out for me. Two Germans in the quarterfinal, a crazy rollercoaster battle and an amazing atmosphere… those types of matches have given me so much. Thinking about the moment that I won Wimbledon still gives me goosebumps.’