Nick Kyrgios has pulled out of his first singles event since his career-best Wimbledon finals appearance, succumbing to a knee complaint at the Atlanta Open.

The 27-year-old told spectators that he was “shattered” not to be able to take his spot in draw for an opening match against German Peter Gojowczyk.

But Kyrgios remains optimistic he’ll still be able to partner with Thanasi Kokkinakis in the doubles event after the Australian Open doubles champions had a first-round victory on Monday.

“I just want to say that I’m extremely shattered that I’m not able to compete tonight,” Kyrgios said.

“I’ve won this tournament once and, you know, I’m playing some of the best tennis of my career.

“All I wanted to do was come out there and give you guys a show and obviously see what I’m capable of, but I’m unable to give out my best performance today. 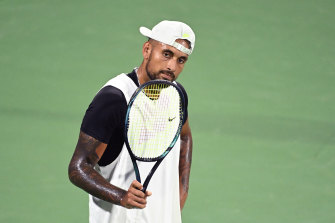 Nick Kyrgios played in the doubles but has withdrawn from the singles at the Atlanta Open.Credit:Getty Images

“I’m extremely sorry but I’m going to keep my hopes up and maybe be able to continue doubles with Thanasi this week.”

Kyrgios has a series of events lined up in the United States ahead of the US Open in New York starting in late August.