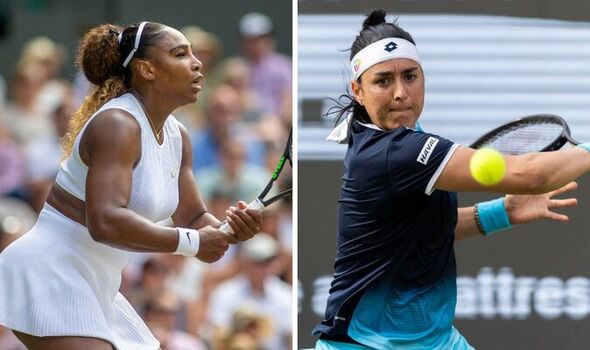 Ons Jabeur has claimed that her WTA rivals are “jealous” that she was picked to be Serena Williams’ partner in the 23-time Grand Slam champion’s comeback at the Eastbourne International. Williams will return to competition for the first time in a year and is playing doubles alongside the world No 3 before returning to singles action at Wimbledon next week.

Jabeur’s full focus is on her doubles pairing with Williams after withdrawing from the singles competition in Eastbourne following her title win in Berlin on Sunday, and the Tunisian has opened up on what it means to her to be a part of the American’s return from injury, admitting that some of her colleagues have been left feeling envious.

“Many players were jealous because I’m playing with her,” she laughed. “Honestly, Serena is Serena. She is a legend and always will be. And the fact that she returned and I get to be part of her journey, it’s really unbelievable.”

The 27-year-old was also hoping to learn from the former world No 1 and wanted to follow in her footsteps as a role model for aspiring players from her background. Jabeur continued: “She did a lot for our sport and I really respect her, respect her story, respect everything that she’s been through.

“I hope I can learn even like two per cent from it. Now I’m joking with other doubles players, I was like, ‘if you have minus 20 Grand Slams, don’t even ask me to play doubles with you any more.”

Speaking about her own hope to inspire more Arab players, she said: “They did much more than me, obviously, but I got inspired by them, what they did for our sport, for everything.  I have to say again, their stories [are] inspiring.  For me, I may be similar but I’m coming from a small country.

“So many girls are dreaming to become tennis players but they don’t have, maybe models to believe in.  They can see a lot of other players but not from Tunisia.  If I’m doing this now I hope I can inspire this generation and really see more and more of our players on tour.”

And coming back to the reaction from her fellow players, Jabeur admitted that even she was surprised to be selected as Williams’ doubles partner for her comeback. “They told me they’re a little bit jealous but I was like, ‘It’s okay. I don’t know why she picked me but I’m honoured’,” she laughed.