Rafael Nadal was in top form once again to reach his 13th Australian Open quarter-final on Sunday, but the world No 2 also had to brush off a bizarre moment during the match. Nadal hasn’t won at the Australian Open since 2009 but he looks on course to challenge for the trophy this year.

Fabio Fognini could have been a tricky opponent with the Italian beating Nadal on four occasions over the past six years.

And there has been some concern about Nadal’s fitness this past week after he suffered an injury setback in the build-up to the tournament.

But there was no problems of note for Nadal throughout the match as he moved freely across the baseline with his trademark full-pace style of play.

Nadal appeared calm throughout the match, even when Fognini went a break up in the second set. 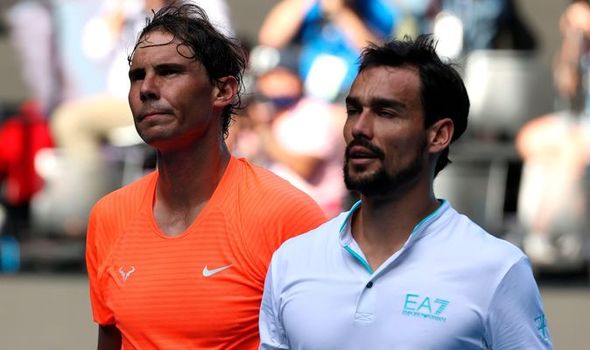 And the Spaniard also managed a chuckle midway through the match after a pair of medics approached him.

The physios were standing at the side of the court waiting for the end of the game being played to go towards Nadal, who had sprinted over to his chair with seemingly no issue.

And Nadal immediately seem confused as to why the pair had been asked to see him as he made it clear that he didn’t need a medic.

“No, not me!” Nadal said with a bemused look on his face.

“Sorry guys, not me. Maybe another court? Thank you.