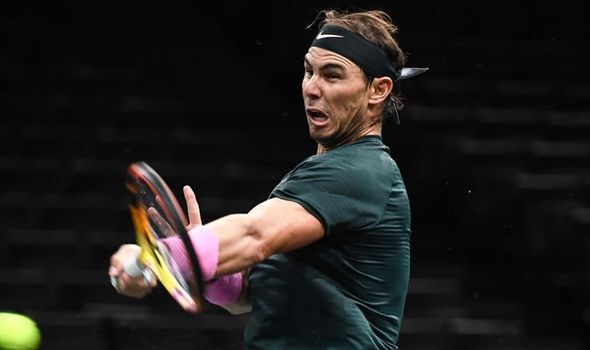 Rafael Nadal has explained the difficulty he has faced this week in playing his first indoor hard court tournament for almost 12 months. Nadal made it through to the semi-finals of the Paris Masters with a 4-6, 7-6, 6-1 win over Spanish compatriot Pablo Carreno Busta on Friday. Nadal is looking to win the tournament for the first time in his illustrious career.

In a year blighted by the coronavirus pandemic, this week’s event is the first Nadal has played on indoor hard courts since the Davis Cup in Madrid in November 2019.

Fresh off the back of his French Open win last month, the 34-year-old says switching to playing on a hard surface has put extra stress on his body and that he has had to adapt.

But he is happy to have reached the last four, where he will play either Alexander Zverev or Stan Wawrinka.

“You need to adapt to everything,” Nadal told Amazon Prime Video. 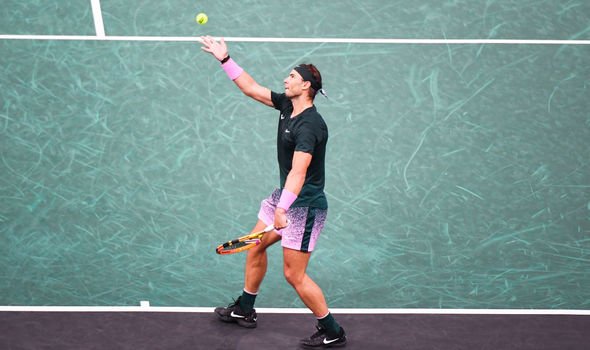 “The body needs to adapt to the hard surfaces and the stress of the high-level competition.

“Now is a moment to be happy because semi-finals are a positive result for me after a long time without playing on indoor hard.

“So tomorrow it’s going to be a very tough opponent in front [of me] and I hope to be ready.”

Carreno Busta took the first set against an off-colour Nadal.

But the 20-time Grand Slam singles champion returned to his best to win the final two sets.

“I started to return better [in the third set],” he added.

“The problem was he was playing well and I was not able to return well.

“So he was winning his serves very comfortably, so when that happens you are able to play more aggressively with less stress on the return, so I think that was the main problem.

“I think later I started to return a little bit better in the second half of the second set, I had a couple of chances and then I finally had the break, won the second set, and after that I was returning better, I was not hitting the ball bad, so it was the moment to push and I was able to make that break.

“It’s true that in the break he made a couple of mistakes but I saved some very difficult balls I think and then I was serving well during the whole match.”