Nick Kyrgios has conceded he has been suffering from “pretty serious” knee problems since last year, and that he is unsure whether he can get through a three or five-set grand slam match in the upcoming Australian Open.

The 25-year-old said this doubt was because of that knee injury, but also because he took most of last year off due to the pandemic and so was still searching for his rhythm and fitness given the lay-off. 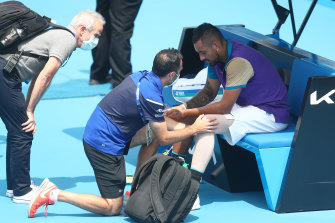 A physiotherapist assess Nick Kyrgios’ knee during a break in his match against Borna Coric of Croatia at Melbourne Park.Credit:Getty Images

Kyrgios lost his round of 16 Murray River Classic tie against Borna Coric 6-3, 6-4 on Friday, as problems with his left knee plagued him throughout the match. The big-serving Australian struggled to extract maximum power from his serve and to move around the court in rallies.

He also received two code violations in the game where Coric broke him in the second set, one for swearing and another for breaking his racquet and throwing it into the crowd.

A trainer came out at the end of the first set to tend to Kyrgios’ knee.

He seemed to indicate he’d had a procedure done on the knee four-and-a-half months ago.

Kyrgios went back onto the court but the discomfort remained, and at the next change of ends he was rubbing his knee while sitting down.

After the match he told media he was relaxed about the upcoming Australian Open and did not indicate he was in any doubt to play in the first round.

The world No.47 will play Portuguese qualifier and world No.184 Frederico Ferreira Silva in the first round. If he makes it to the third round he will likely face world No.3 Dominic Thiem.

“Yeah, well, I was going through some pain during last year,” he said about his knee. “I’ve always had kind of knee issues, especially my left knee. It was something that was pretty serious. I’d rather not talk about it.

“I mean, I did everything I could to get it better, to get it able to play. I’m lucky that I’m healthy enough to play.

“There’s a massive question mark for me [to play three or five sets] even if I was completely healthy, not playing in a year. It’s not easy to turn around and prepare for such an event just like that. It’s not like a tap.

“I thought I did everything I could this week. I won a couple matches. I had a lot of court time. I practiced every day, as well. I think I’m ticking the boxes. I think I’m giving myself a chance.”

He said there were question marks around most players on the tour because physical preparation for the Australian Open has been unusual.

“Anyone can kind of get injured here or there because no one’s really played a best-of-five match in ages. Obviously the guys at the US Open [have],” he said.

Kyrgios enjoyed a run to the Australian Open fourth round in 2020, which culminated in a pulsating loss to Rafael Nadal.

His four matches at last year’s Open were all in front of packed, rabid crowds. Kyrgios made no secret of the fact he thrived off that, and the support he was given for driving the response to Australia’s bushfires of that summer.

With only 50 per cent crowds at this year’s Open because of the pandemic, Kyrgios seemed less enthused about what energy he may be able to get from the fans.

“Yeah, I mean, it’s a tough thing to talk about. At the end of the day it’s a tennis match,” he said.

“With everything going on, it really shouldn’t matter to be honest. Yeah, of course it’s going to be tough. If I’m down two sets to love, I’ve been down like that before and come back and won. If there’s no crowd that day, I’m probably not going to win.”

He said it would maybe favour players who don’t usually play in front of big crowds.

“That’s the way it is right now. I can’t complain about it.It’s going to be tough, especially in your home backyard. Last year when I played [Karen] Khachanov or Nadal, as you said, every single person in the stadium was going nuts.

“It was like a movement last year with the bushfires, with everything.”