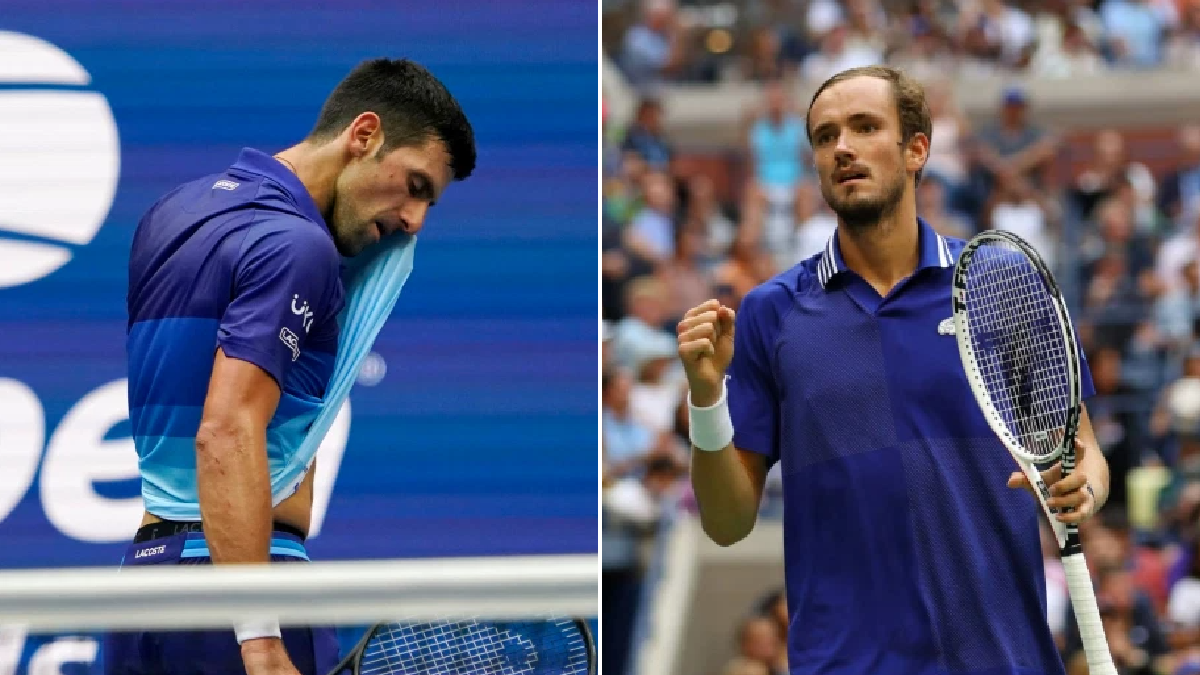 Novak Djokovic’s dream of an historic calendar Grand Slam came crashing down at the final hurdle as Daniil Medvedev secured the US Open title.

The world No.1 was aiming to become the first player since Rod Laver in 1969 to win all four majors in the same year but Medvedev had other ideas.

Medvedev, who suffered defeat in the Australian Open to the Serb at the start of the year, produced a dominant display to record a 6-4, 6-4, 6-4 victory and win his maiden Grand Slam.

Whether it be fatigue or the pressure he has to live up to as the man who has held the world No.1 position for 337 consecutive weeks, Djokovic will know he missed the chance to go onto 21 career Grand Slam titles and one clear of rivals Rafael Nadal and Roger Federer.

Djokovic chose to serve first in order to get ahead but his decision proved futile as Medvedev secured an early break courtesy of his opponent’s unforced errors.

Medvedev was not messing about as he held serve before finding himself on another break point to which Djokovic brutally denied with a fierce overhead shot, followed by two aces to get his first point on the board.

The Russian made the most of his powerful serve in the early stages with a 40-love service game but as Djokovic started to find his feet, he too recorded a hold of serve on the same scoreline.

It was clear from the beginning that Djokovic would need to find a way to return the world No.2’s ferocious first serves but another 40-love service game put the pressure on the Serb to hold to stay in the set.

And how did Medvedev then go on to close out the first set in 36 minutes? You guessed it, an ace that whizzed past Djokovic like he wasn’t even there.

This was familiar territory for Djokovic though, now the fifth match in a row he’d lost the opening set, and any tennis fan would’ve been foolish to write him off so early on.

Djokovic would finally get three break points against Medvedev in the second game of the second set, but an unforced error coupled with his opponent’s big serve saw the world No.1’s opportunity go begging.

Medvedev had spent five and half less hours on court in his matches than Djokovic going into the final and it was starting to show, the Serb stood rooted as Medvedev fired winners all across the court.

This was not following the calendar Grand Slam script. The 34-year-old had to serve a 124mph serve out wide to save break point in the third before eventually holding.

It took until the fourth game for Djokovic to break his first racket in frustration. Having missed his chance at break point, Medvedev kept his cool and Djokovic slammed his racket to the floor several times as the crowd booed and he received a penalty point.

Medvedev was channelling his aggression in the right way as he went a set and a break up and before long he had three set points.

Djokovic needed to find a response but on the 90 minute mark his shot went wide and a stunned Arthur Ashe crowd reluctantly rose to their feet to applaud Medvedev’s two-set lead.

Into the third set and Djokovic was still looking for a way out the darkness, Medvedev again breaking the favourite in the first game.

The Russian was relentless, he could see Djokovic was on the ropes and he continued to apply the pressure as a series of lengthy rallies left the latter looking tired as further unforced errors saw Medvedev go a double break up.

Medvedev proved he too had some nerves in himself as he was soon denied victory on championship point as the crowd played their part to force him into double faulting.

All the talk had been about Djokovic’s quest for a calendar Grand Slam but as he teared up in the final game, finally Medvedev had revenge for the Australian Open as he held his nerve, and his serve, at the third time of asking to see out the match.

This is certainly not the last we’ve seen of Djokovic at the top but perhaps Medvedev’s win now spells the end of the top three’s dominance in the sport.