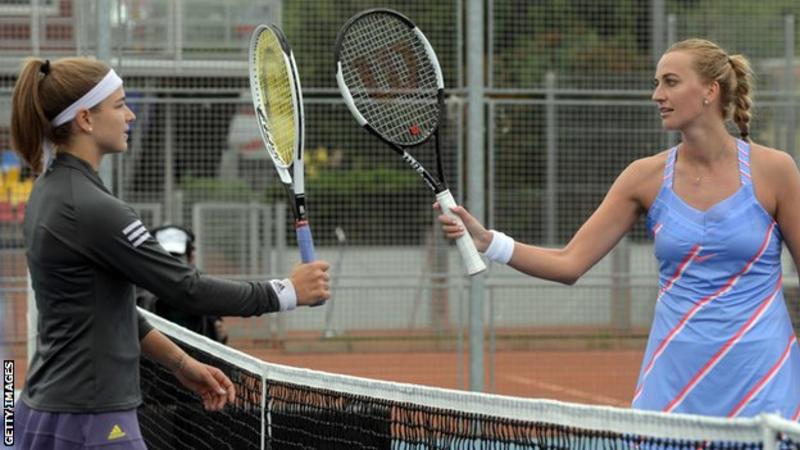 With the professional tours on hold until at least August because of the coronavirus pandemic, the world’s top players are looking for alternative ways to keep match sharp.

The future – in the short term at least – appears to be domestic and regional exhibition tournaments between players based in the same part of the world.

With fundraising, trash-talking and changeover chats with online fans, tennis is back with a twist.

Where are they being held? And who is playing?

In the singles, the eight players will be split into two groups for round-robin matches, leading to semi-finals and the final.

“This is the first time these guys have come together to compete against each other,” Jamie Murray told several UK newspapers. “They have been trash-talking about this for quite a few weeks.”

The event, which hopes to raise at least £100,000 for the NHS Charities Together fund, will be televised on Amazon Prime.

The Lawn Tennis Association has organised four separate tournaments for men and women over consecutive weekends in July.

Sixteen players will compete in each knockout singles tournament, with matches being played over two sets and a deciding match tie-break if needed.

They are open to the highest-ranked players with LTA membership, although British women’s number one Johanna Konta is not expected to enter.

An initial 1,000 tickets were sold in seven minutes for the first leg of the Adria Tour which takes place on clay in Belgrade this weekend, with strict health and safety measures in place.

The eight-man, round-robin tournament will raise funds for charitable causes, including childhood development and education programmes run by Djokovic’s foundation, with further events set for Montenegro, Croatia and Bosnia.

With many players based in the glamorous surroundings of the French Riviera, leading coach Patrick Mouratoglou is using his training academy near Cannes to bring together several well-known faces to compete in the Ultimate Tennis Showdown.

Mouratoglou says the players have been chosen “because of their personality” as well as their ability, with the event promising to create a unique digital experience for fans.

That includes players wearing microphones and subscribers asking them questions at changeovers.

The Elite Trophy will run over four weekends, with two teams of six players facing off in three singles and one doubles match each weekend.

A men’s tournament between the “best Spanish players in the world rankings” was announced last month – but Rafael Nadal is not expected to be among them.

Members of the victorious Davis Cup team, including world number 12 Roberto Bautista Agut, are expected to play in a league format over four weekends.

A women’s event was announced shortly after, although it is thought Australian Open finalist Garbine Muguruza will not take part.

Up to 500 fans (20% of the stadium capacity) will be able to watch Australian Open champion Sofia Kenin, along with former Grand Slam champions Kim Clijsters and Sloane Stephens, take part in the World Team Tennis event.

A 63-match season will be played over 19 consecutive days, with the semi-finals and final to follow.

With Wimbledon and the British grass-court season cancelled, the first event of the year on the surface will be held in Berlin.

“I am curious to see where I stand with my tennis,” said Zverev.

The competition will be held on grass at the Steffi Graf Stadium from 13-15 July, then switch to hard court in a hangar at Berlin’s Tempelhof Airport from 17-19 July.

What is it like to play in these events?

Several regional events have already been held, including a smaller tournament in Prague which was won by Kvitova.

“The fact that there were only Czech girls in the tournament wasn’t unusual for me,” said the world number 12.

“It was very unusual to see people wearing gloves, face masks, towels not being handed over by ball girls, not shaking hands, but most importantly, that it was without spectators.

“The atmosphere wasn’t what we are used to, but I think all went well. After all that happened it was an amazing tournament.”

How have these events been made safe?

Although national guidelines to safely playing tennis differ between countries, there are a number of common rules which are likely to be followed across the world:

However, some events – including Djokovic’s Adria Tour and the World Team Tennis event – are allowing a small number of fans who will sit apart at safe distances.

How do these events affect the ATP and WTA tours?

Prize money is available at some of the events – including the LTA-organised one in Britain – which will provide much-needed income to many players.

No ranking points are available as they are classed as exhibitions outside the ATP and WTA tours.

Both tours are broadly supportive of domestic tournaments, providing they meet health and safety requirements.

“We understand these are attractive opportunities for our players to play some competitive matches and earn some income,” said the ATP.

“We welcome the opportunity for live sports and live tennis to resume as it has certainly been missed,” added the WTA.