Nick Kyrgios revealed he had “dark thoughts” going through his head as he battled to come from behind to beat Ugo Humbert at the Australian Open. Kyrgios beat Frenchman Humbert in five sets in a thrilling encounter.

Kyrgios lost the first set and seemed destined to crash out of the competition after a poor start.

The Australian was encouraged by the support of the home crowd at the Melbourne Arena, and battled back to progress to the third round.

He will face Dominic Thiem in a tough match against one of the pre-tournament favourites, but showed against Humbert that he is able to battle against adversity.

Kyrgios levelled the match with a 6-4 win in the second set, but again found himself on the brink of defeat after losing 6-3 in the third. 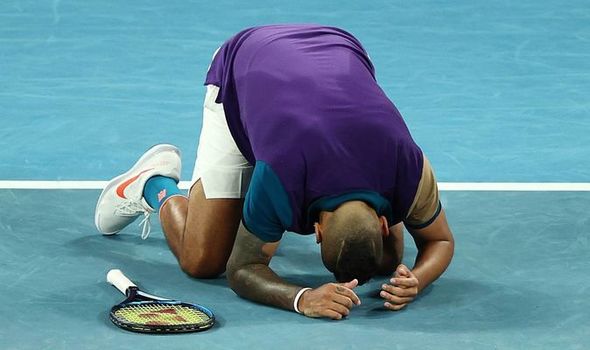 He didn’t hide his frustration, as he threw his racquet to the ground and smashed the frame after losing the opening set.

Then, after battling back to level the match in the fifth set, he risked getting disqualified after losing his cool over an umpiring decision.

After being told he had hit the net with his first serve on two occasions, he launched into an x-rated rant at the umpire, telling her: “That’s f*****g bull****, look at the score.”

He managed to regain his composure and used the vocal support of the crowd to serve out the final set and progress, but admitted afterwards he had found it tough to continue.

Kyrgios opened up on having “dark thoughts” and referred to it as one of the craziest games he has ever played.

“Honestly If you were in my head, I was thinking about all the s**t I was going to cop if I lost that match,” he said.

“Honestly I don’t know how I did that. I am lost for words.

“That is one of the craziest matches I have ever played. 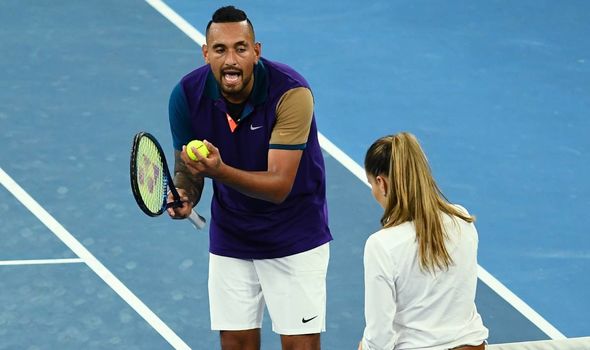 “It was a strange match. If you were inside my head, there were some dark thoughts in there.

“That tends to be my career. I live to fight another day.

“I live to fight another day and I hope I can continue to play good tennis like that in front of you guys.