Defending champion Sofia Kenin is out of the Australian Open, with the American world No.4 tearfully admitting the pressure to defend her title got to her in Melbourne.

The 22-year-old slumped to a 6-3, 6-2 defeat at the hands of world No.65 Kaia Kanepi on Margaret Court Arena on Thursday, removing another highly credentialled opponent from Ashleigh Barty’s half of the draw. 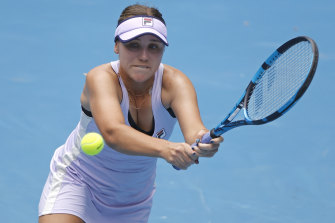 Sofia Kenin is out of the Australian Open, unable to defend her title.Credit:AP

“My head wasn’t there,” said Kenin. “Obviously I’m not going to take any credit away from her. She played really well at those good points.

“I had chances. I just couldn’t take it. I obviously know why, because the nerves big-time got to me.”

The tears returned again when she was asked about the pressure of defending the title, adding that she knew retaining the trophy would be a tall order.

“I’m not there 100 per cent physically, mentally, my game. Everything just feels real off obviously. It’s not good,” Kenin added.

“It’s weird. I’ve been practising for two weeks. Luckily I’ve been able to practise. I felt fine in practice. Just couldn’t do that in the game.”

Kenin backed up her breakthrough major with a finals appearance at the French Open during last year’s pandemic-hit WTA season.

“The Aussie swing definitely got me,” said an emotional Kenin about the start to 2021.

She said her circumstances were sharply different to 2020, when she charged through the draw in Melbourne, defeating Barty in the semi-finals, to race to her first major title.

“I started having a good run and everything. It’s not like I was ranked a hundred and all of a sudden I won. I mean, I was like there, top 20 or something,” said Kenin about her circumstances 13 months ago.

“I just didn’t put this much pressure on myself as [compared to] this year. This year I put, like, a lot of pressure. I obviously felt like I was expected to do well. Obviously didn’t, so … that’s the difference for me.“

Barty’s two-sets-to-love victory against countrywoman Daria Gavrilova has set up a third round match against Russian 29th seed Ekaterina Alexandrova.

“I don’t think was really good quality today. I think I just played better in some moments, which I didn’t last week,” said Pliskova.

“I knew if I just play at least similar as I was playing last week, I knew it’s going to be difficult for her to repeat what she played last week.

“It was more about like staying positive, staying in there. I knew I’m going to have some chances, which I did.”

Pliskova meets Muchova, who was her practice partner during the mandatory 14-day period of quarantine after players arrived in Melbourne.

“Even if we would not practise those two weeks in quarantine, we practice a lot in Czech. We’re actually quite good friends,” Pliskova said.

“Of course, she’s a dangerous player. It’s going to be very tricky.”

“It was a tough match, as I expected against Kuznetsova,” said Bencic, who is on the cusp of the top 10.

“We always have three-set matches. We [have] played a couple of times.

“I was happy with the way I fought, super happy about the win of course.

“But, yeah, it was not easy out there. I just tried to tough it out.”