It’s been eight long, injury-punctuated years, but Thanasi Kokkinakis may have finally started to realise his potential.

Kokkinakis’ body has betrayed him since he turned professional in 2013, never allowing him a clean run on tour.

His ranking peaked inside the top 70, but if it wasn’t for battles with illness and knee, groin, shoulder and pectoral injuries, he probably would have carved a path to the world’s top 20.

He certainly showed that potential in his run to the Adelaide International title, a moment he described as his “highest high”.

“To my family, my coaches, friends, everyone here, what a ride it has been,” Kokkinakis said post match. 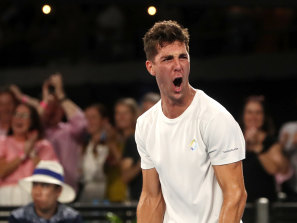 Thanasi Kokkinakis fought back from a set down to win the Adelaide International final.Credit:Getty

“You have seen me at my lowest lows and now, at my highest high. It’s been a serious journey. This is only the beginning.

“I’ll worry about next week, next week, but for now, I’m just so happy. Thank you so much.”

Kokkinakis was overcome with emotion as he explained the moment he won his first tournament on tour.

“Geez, when I saw that final ball went long, I don’t think I’ve ever felt emotions like that,” he said.

“You grow up playing, you never know if it’s ever going to happen. I made one final before.

“To do it in Adelaide, a court I grew up playing on when I was seven, eight, nine years old, my hometown, in front of friends and family, they’ve had a tough year, ridden the ups and downs with me, yeah, I’m so happy.

“As I said, in front of mum and dad, then seeing the tears in their eyes when I went to hug them after the match, they’re the moments you live for. Who knows, as I said, not a lot of people get the opportunity to win a title.”

Kokkinakis will face Yannick Hanfmann in the first round of the Australian Open.

If he beats the German qualifier, he will face Rafael Nadal in round two of his home grand slam.

That would be a reward for emerging from a tight tussle with Rinderknech, who claimed the first set in a tiebreak off the back of one Kokkinakis error.

It was the same story in the second set.

Neither player made any inroads on the other’s serve.

Both players won just under 90 per cent of the points on their own serve, and neither earned a single break point opportunity.

The remarkable serving performances led to another tiebreak in the second set.

The Frenchman pinched the first point on Kokkinakis’ serve, but he responded with a brilliant, inside out, cross-court forehand which put the breaker back on serve.

The courage to play that shot, at that point in the match, turned the tide.

Kokkinakis had a 4-2 lead at the change of ends, and made it five straight points with another inside out, cross-court forehand winner.

A wide first serve sent the match to a deciding set.

The momentum continued through the start of the third set.

Kokkinakis forced the first break point of the match and took his opportunity with a perfect return point.

He held his nerve on serve and broke Rinderknech again to clinch the match, sparking emotional scenes in Adelaide.