When play started at Melbourne Park on Monday, there were six people in Garden Square. Two were workers.

In Rod Laver Arena, there were maybe 1000. It wasn’t so much a crowd as a batch. In the first game of the first match of the tournament, the chair umpire asked a spectator to stop talking on his phone. Not stop it ringing, stop talking. Everyone could hear him. 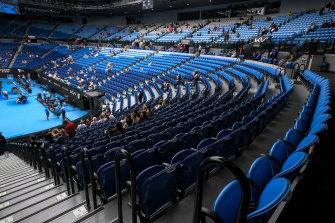 Crowds were thin on day one of the Australian Open. Credit:Eddie Jim

The emptiness had several disconcerting effects. One was to make Rod Laver Arena look and feel more like a medieval fortress than a stadium, or the setting for a dystopian movie. Royal blue court, dark blue banks of seats, grey overhangs, grey skies, unrelieved by any gayer hue, it was an unusually and incongruously grim place.

The black and blue uniforms of the many and obvious security staff added to the forbidding aspect; it made it look as if this was their court.

Electronic line calling completed the military effect. Instead of the usual register of linespeople’s voices, it was the same call in the same voice each time. It could have been made by Gamestop. And it brooked no argument, which was also strange.

But the weirdest effect was the silence. This court has known pregnant silence and stunned silence and respectful silence, but this was the utter silence of space. When Naomi Osaka got to the first set point of the tournament, there was a clap, singular.

Of course, in this tipped-up world, one woman’s trash is another’s treasure. “I’m really happy to see people in the stands,” said Osaka, a former champion here, mask affixed post-match. “It was a bit lonely in New York.” New York is shorthand for last year’s US Open, where there were no spectators. She won there, too, by the way.

Serena Williams was grateful for the small mercy of a small crowd. “It’s getting there. Obviously it’s not a full crowd like I’m used to,” she said. “At the same time compared to last year, it’s definitely different. Just to have any sort of crowd. It’s definitely nice to have some people, a lot of people out there.”

Of the usual first-week Babelesque babble and crush, there was none. Nick Kyrgios could have belted a serve down any of the concourses and hit no one. He could have smashed a racquet and it wouldn’t have made a sound. There were corrals, but no one to corral, beer but no queues.

Further afield still, in the trade fair corner of the Open, business was slow to idle. Two young women tasked to keep company a luxury car on display kept looking around, as if wondering whether anyone would notice if they took it for a spin.

Osaka and Williams led out the tournament on Rod Laver. Their respective opponents had top 50 rankings, but did as first round opposition often does in a major: they kept their social distance.

Osaka versus Russian Anastasia Pavlyuchenkova was superstar versus scrambler, which at least made for some decent tennis. The trouble for Pavlyuchenkova is that superstars scramble pretty damned well, too. In just more than an hour they were done.

By the time Williams shaped up to Germany’s Laura Siegemund, the crowd in Garden Square had swelled to 13-and-a-half. On centre court, you wouldn’t think a crowd of 1000 could thin, but it did in the VIP enclosure. It was lunchtime.

Williams’s outfit looked as if she couldn’t make up her mind whether to play tennis or go for a bike ride, but there was nothing half-and-half about her tennis. She began the match by dropping her serve, but then simply bossed Siegemund off the court. She got change from her hour on court.

As for the Flo-Jo inspired get-up, let’s just say that everyone is making do with less this year.

The 2021 Australian Open is what it is, that is, a shadow of its usual self, but a major championship none the less, with all that imports. It’s the half Open, but for the whole-hearted, as usual. It’s just a matter of accustomising oneself. Oddly enough, its cut-down formulation worked better on the smaller, more boutique courts, where a small crowd was proportionately bigger.

By day’s end, the Open was a little emptier again for the exit of highly rated Australian John Millman and former Australian Open champion Angelique Kerber after losses to players much lower in the rankings.

Would a few more fans have gotten Millman over the line in his five-setter? We’ll never know. Did even a few fans get compatriot Alex Bolt up in his quasi-upset? He thought so.

The moral of day one was we’ll muddle through. There’s no alternative. To aficionados at least, the Australian Half Open is better than no Open at all.