Negotiations and trans-Atlantic flight complete, Novak Djokovic was seated on the sofa of one of his hard-won concessions this week: a spacious rented home near New York City, nestled amid the trees and far from the commotion.

Djokovic had just put on a shirt after sunbathing on the terrace. 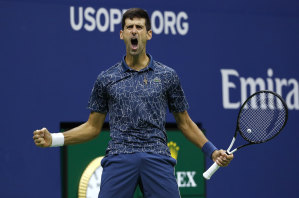 Novak Djokovic will chase a fourth US Open crown with his biggest rivals, Rafael Nadal and Roger Federer, both absent.Credit:AP

"With the trees and serenity, being in this kind of environment is a blessing," Djokovic said on a Zoom call. "And I'm grateful, because I've seen the hotel where the majority of players are staying. I don't want to sound arrogant or anything like that, and I know the USTA did their best in order to provide accommodation and organise everything and organise these bubbles so the players can actually compete and come here, but it's tough for most of the players, not being able to open their window and being in a hotel in a small room."

It has been a bumpy and tortuous road to staging the US Open amid the coronavirus pandemic. Djokovic's demands and complaints — public and private — did not make it any smoother for the United States Tennis Association to facilitate the tournament. But unlike many other leading international players, including Rafael Nadal and Roger Federer, Djokovic is actually here after this long and unexpected break from the tennis tour.

He is still ranked No. 1 and remains a perfect 18-0 in 2020, just as he was when the pandemic-related hiatus began in March.

But he was hardly a big winner during the forced off-season. He generated concern and controversy by questioning vaccination and claiming that water could be affected by human emotions. And he dented his credibility and brand by organising the Adria Tour, a charity exhibition series in Serbia and Croatia in June that seriously lacked in social distancing and decorum, leading to a cluster of coronavirus cases. It was cancelled before the finish with several leading players and some support staff testing positive.

Djokovic and his wife, Jelena, were among them, and they isolated for two weeks with their two young children in their native city of Belgrade, Serbia. 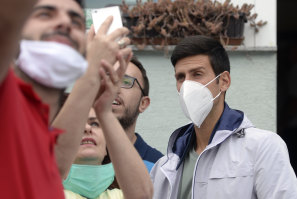 Djokovic is mobbed by fans last month during his first public appearance since recovering from COVID-19.Credit:AP

"We tried to do something with the right intentions," Djokovic said of the tour. "Yes, there were some steps that could have been done differently, of course, but am I going to be then forever blamed for doing a mistake? I mean, OK, if this is the way, fine, I'll accept it, because that's the only thing I can do. Whether it's fair or not, you tell me, but I know that the intentions were right and correct, and if I had the chance to do the Adria Tour again, I would do it again."

Djokovic was full of mixed emotions in this week's interview, ranging from apologetic to defiant, and said he had used the long break to deepen his connections with his family and his understanding of issues like ecology and health.

"I think this is a huge transformational phase for all of us on this planet, and I think maybe even the last wake-up call," he said.

Djokovic said his coronavirus symptoms were mild, lasting four to five days. He said he had no fever but did have fatigue and some loss of smell and taste and sensed some loss of stamina when he initially returned to practice.

Travelling without his family, Djokovic arrived in New York on Saturday to "get acclimated" to the unusual restrictions for the tournament and "just to be able to be OK once it's go time."

He will first play in the Western & Southern Open, a combined men's and women's event that has been moved from its usual location outside Cincinnati to the US Open site to create a two-tournament bubble. He will compete in singles and doubles, teaming up with his Serbian compatriot Filip Krajinovic, with his first match either Sunday or Monday.

Both tournaments will be played without spectators at the USTA Billie Jean King National Tennis Center in Queens, with players and their support staff required to be tested regularly and banned from travelling beyond their lodging and the tournament site without express permission from US Open leadership.

"I was very close to not coming," said Djokovic, who said he decided to go to New York less than a week before he arrived and only after players were given guarantees by European governments that they would not be expected to quarantine when they traveled to Europe after the US Open.

My issue here with vaccines is if someone is forcing me to put something in my body. That I don't want. For me that's unacceptable.

"There were a lot of uncertainties," he said. "And there still are, yeah, a lot of things that are not really clear."

He continued: "I want to play. I mean that's why I'm here. I am personally not afraid of being in a risky, dangerous health situation for myself. If I felt that way, I most likely would not be here. I am cautious of course, and I have to be responsible and of course respect the regulations and rules and restrictions as anybody else. But things are unpredictable. Anything can happen in the tennis court or off the tennis court."

Djokovic said his own experience with the coronavirus had not altered his views on vaccines. He has said that he would have a difficult decision to make if receiving a coronavirus vaccine became mandatory to compete on the tennis circuit.

"I see that the international media has taken that out of context a little bit, saying that I am completely against vaccines of any kind," he said. "My issue here with vaccines is if someone is forcing me to put something in my body. That I don't want. For me that's unacceptable. I am not against vaccination of any kind, because who am I to speak about vaccines when there are people that have been in the field of medicine and saving lives around the world? I'm sure that there are vaccines that have little side effects that have helped people and helped stop the spread of some infections around the world." 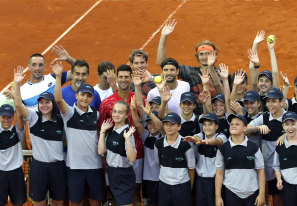 Djokovic poses with players and volunteers at his ill-fated Adria Tour.Credit:AP

But Djokovic did express concern about potential issues with a coronavirus vaccine.

"How are we expecting that to solve our problem when this coronavirus is mutating regularly from what I understand?" he said.

Djokovic said the USTA's leadership was initially reluctant to allow players to stay in rented homes during the US Open. They relented but imposed strict conditions. Djokovic must pay not only the rent but also for round-the-clock security approved and monitored by the USTA, in part to help enforce the same protocols other players are following.

This is not simply the honour system.

"It's super important I made this investment because it's going to make me feel better," Djokovic said. "I'm going to recover better and can actually have some outdoor time when I'm not on site."

He has come with the maximum three team members, another concession he worked to secure from the USTA, which originally planned to restrict players to just one. One of Djokovic's housemates is Goran Ivanisevic, the former Wimbledon champion who is one of his coaches and also contracted the coronavirus during the Adria Tour, along with other players and coaches.

To those watching from afar, that outcome seemed logical in light of the lack of safety measures. Fans were allowed in stadiums. Masks were recommended but not required. Players hugged, high-fived and even danced the limbo in close quarters in a Belgrade nightclub.

"I agree things could have been done differently with the nightclub," Djokovic said. "The sponsors organised. They invited players. We felt comfortable. We had a successful event. Everybody was really happy and joyful."

Djokovic said the tour, conceived with the idea of helping lower-ranked pro players in the former Yugoslavia during the hiatus, was organized in cooperation with national governments and tennis federations. At the time, coronavirus numbers were low in Serbia and Croatia with few societal restrictions.

"We've done everything they asked us to do, and we followed the rules from the day one," Djokovic said.

But Djokovic said he soon grasped that the view from abroad was very different.

"When someone from Australia or America looks at what was happening in Serbia, they're like, 'Oh my God, I mean are you crazy? What are these people doing?'" Djokovic said. "So I really understand."

There was also criticism in Croatia of the tour and the Croatian tennis federation's role in managing the event. But Djokovic, who also made sizeable donations with his wife to coronavirus relief efforts in Serbia and Italy, maintains the tour was still worth organising for the funds it generated for the region.

"I don't think I've done anything bad, to be honest," he said. "I do feel sorry for people that were infected. Do I feel guilty for anybody that was infected from that point onward in Serbia, Croatia and the region? Of course not. It's like a witch hunt, to be honest. How can you blame one individual for everything?"

Djokovic is 33, but this will be the first of the 61 grand slam tournaments he has played in his long and triumphant career in which his biggest rivals — Nadal and Federer — will both be absent.

Nadal, 34, the reigning champion, chose to prioritise the clay-court season that will closely follow the US Open on the reconfigured calendar. Federer, 39, does not plan to play again in 2020 after two knee surgeries this year.

In New York, the rightly named Big Three will be reduced to one.

"It is strange, because these two guys are the legends of our sport and with or without crowds, they are going to be missed a lot," Djokovic said.