Practice and tactical analysis might make perfect for most athletes, but it’s not always a top priority for surprise women’s quarter-finalist Hsieh Su-wei, who, at the ripe old age of 35, has reached the last eight of a grand slam for the first time.

The unseeded veteran from Chinese Taipei (Taiwan) reached her career milestone on Sunday by downing 19th seed Marketa Vondrousova and now faces the daunting prospect of a showdown with No. 3 seed Naomi Osaka. 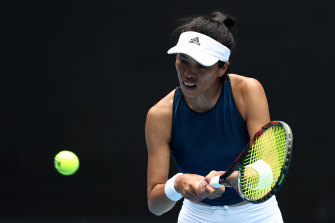 Hsieh Su-wei of Chinese Taipei is all concentration against Czech Marketa Vondrousova on Sunday.Credit:Getty Images

But, says her former full-time coach and now part-time mentor and coach, former Australian tennis great Paul McNamee, don’t expect Su-wei to be tearing up the practice courts in preparation.

He describes her as a free spirit, an inspirational player who can summon up exquisite shots and unexpected winners with seemingly effortless ease – as long as she is in the right frame of mind and feels a positive vibe.

“She is a free spirit and doesn’t like to fuss to much about tactics or things like that,” he said on Sunday.

“She doesn’t like technical or statistical analysis. I tried to give her statistics before the tournament but it didn’t go over well. I got an earful – ‘why are you giving me this nonsense’,” he said with a laugh.

She is the world’s No. 1 doubles player and has won three grand slam doubles titles. While Su-wei has never troubled the scorers in the later rounds of the grand slam singles tournaments she is not a complete no hoper playing alone, having been rated inside the top 25 in the women’s rankings earlier in her career.

Ask McNamaee if a more disciplined, structured and orthodox approach might have made her even better, he shakes his head.

“She’s not that competitive to be honest. Of course, she goes out there and tries to win, but she’s not intrinsically a competitive person.

“It [a more routine approach] would have put her in a box, it would have cornered her, she needs to be free. If she’s not feeling it, she’s better off not playing.”

McNamee was delighted that his charge had gone further than ever before because with the clock ticking towards retirement opportunities will be limited.

“Because she had not made a grand slam quarter-final ever this was seen as maybe her last chance to do so in singles – a box that she had not ticked in her career.

“At the age of 35, you know you are not going to get many more chances, so that added to the pressure of today’s game.

“But she handled it well, she played a clean game, she played her chess … she used the king, the queen, the rook, all the different pieces that she does, she brought it all together.”

Now based in Paris with her French partner, McNamee says that her mindset means that all types of opponents and surfaces come the same to Su-wei.

“She doesn’t worry about the courts, hard, clay or grass, the speed of the ball, whether it’s fast or slow, it makes no difference to Su-wei.”

Osaka will start a warm favourite. But who knows – a player with little to lose who is not worried about her opponent may still have some tricks up her sleeve.