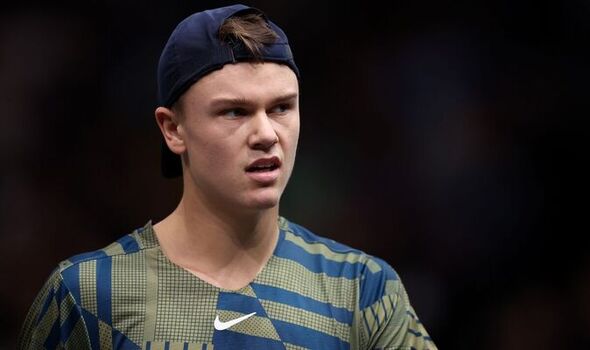 Holger Rune has addressed the increased attention and controversy surrounding him after reaching the biggest final of his career in Paris-Bercy. The world No 18 has already found himself the subject of rumours of feuds with the likes of Stan Wawrinka and Casper Ruud during his young career.

Rune is facing Novak Djokovic in the final of the Paris Masters after reeling off four straight wins over top 10 players this week. The 19-year-old found himself on the brink of elimination in the first round as Stan Wawrinka held match points during their clash before the Dane bounced back to win in three sets before going on a tear to make the final.

But reports emerged that Wawrinka had told the teenager to stop “acting like a baby” during their handshake at the net, which were later denied by Rune’s mum and manager Anke. It wasn’t the first time the two-time title winner found himself involved in beef after accusing Ruud of shouting at him following their French Open clash earlier this year.

The teenager has now been asked about the increased attention he and his antics are getting following his run in Paris-Bercy but Rune was positive in his response, taking it as a sign of his improvement. “I think it’s normal,” he said of his publicity.

Rune has already disproved one of the theories about a rivalry with Wawrinka, as he and the three-time Major champion exchanged friendly comments on social media after people thought the Swiss star slammed the world No 18 at the net. “@stanwawrinka85 is an incredible fighter,” the Dane wrote in an Instagram caption after the match, to which the former world No 3 replied with a clapping and muscle emoji.

Meanwhile, Ruud is the one who has denied beef with Rune after the teenager accused him of shouting in his face after losing their French Open clash. The world No 4 defeated the No 18 6-1 4-6 7-6(2) 6-3 in the quarter-final and the 19-year-old accused the eventual finalist of approaching him in the locker room and shouting in his face.

“He taunted me in the locker room. Went straight up to me and shouted ‘YEEESS’ right up in my face,” Rune said, though Ruud’s dad denied the claim and said the Dane was lying.