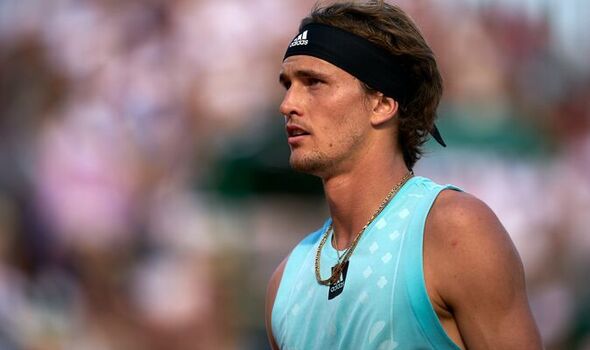 Alexander Zverev has been snubbed from a list of French Open favourites despite being on course to become the second seed at the tournament. Former British No 1 Greg Rusedski explained that the German was not a realistic threat for the title as he named Novak Djokovic, Rafael Nadal, Stefanos Tsitsipas and Carlos Alcaraz as the four favourites to win the clay-court Grand Slam.

Rusedski named the top picks for the French Open title at the conclusion of the first tournament of the clay season, adding Tsitsipas to the list after he successfully defended his Monte Carlo Masters title. “What a performance if we look at it. To win back-to-back titles, we saw the list of six great champions who have done that. All No 1s, all Roland Garros champions,” the former world No 4 told Amazon Prime.

“So in a great position to have another great run at the French Open. It puts him in the list of four guys who you think have a real shot to win it with Rafa, Novak and Alcaraz as probably the four guys that you think can win Roland Garros in the men’s this year so it’s an exciting time for men’s tennis at the moment.” Tsitsipas reached his maiden Grand Slam final at the French Open last year where he went two-sets-to-love up on Djokovic before the Serb fired back to win his then-19th Major title.

As the 13-time champion at Roland Garros who started the season on a 20 match-winning streak, Nadal is another favourite for the title if he recovers from his rib injury in time for the tournament while Djokovic is a clear front-runner as the defending champion and world No 1. Rusedski also named Alcaraz, who recently became the youngest man ever to win the Miami Open, but world No 3 Zverev was notably absent from his list of potential champions.

With world No 2 Daniil Medvedev sidelined following a hernia surgery, he will likely miss the Parisian Grand Slam which would leave Zverev as the second seed, but the 1997 US Open finalist said he couldn’t see the 24-year-old going beyond the semi-finals. “Well we’re talking about winning,” he started.

“Can he have a deep run? Of course he can, he can get to the semis. But we’re talking about people who can hold the trophy at the end of the tournament. Let’s not forget he always plays well in Madrid, he’s won that on a few occasions, he’s won in Rome. But I just feel those guys have just a little bit more than him at the moment and we’d probably be having a different conversation against Zverev had he beat Dominic Thiem in that US Open final.”

The retired pro also defended his reasoning to put Alcaraz among his top four contenders despite the world No 11 crashing out of Monte Carlo in his first match to fellow Next Gen star Sebastian Korda 7-6(2) 6-7(5) 6-3. Piling praise on the young Spaniard, Rusedski said: “He’s that good, this kid is a phenom. He is ridiculously good. Let’s not forget, he won Miami. This week he lost against Korda who is inspired and he had his chances. Put him in the conversation, he is special.”

Alcaraz was forced to qualify for the French Open last year as a result of his then-world No 97 ranking. He reached the third round where he lost to Jan-Lennard Struff but this year will be one of the heavy favourites and top seeds.