There was a point when even Lleyton Hewitt couldn’t quite believe what was happening. 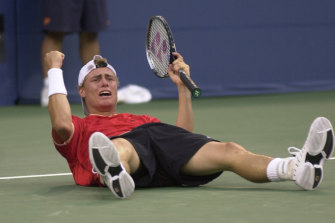 Lleyton Hewitt celebrates defeating Sampras at the US Open.Credit:AP

He was demolishing Pete Sampras on centre court at Arthur Ashe Stadium, in the arena the Americans call “Pete’s House”, and doing it with clinical ease.

Not only that, he was doing it by attacking and ultimately dismantling Sampras’ biggest weapon – his booming serve.

“I even had to look up at the scoreboard a couple of times to check what the score was,” Hewitt said later.

“I thought, ‘Am I really two points from the match here?’ ” He was. And, on his second championship point, Lleyton Hewitt became the face of the future of tennis, spanking yet another double-handed backhand passing shot away from the lunging Sampras and into the corner, taking the match 7-6 (7-4), 6-1, 6-1.

A tournament that began with a race controversy Hewitt said was one of the worst experiences of his career ended with the attainment of a dream that began when his parents first put a tennis racquet in his hands at age five. 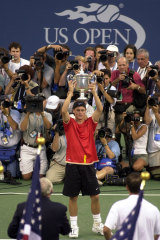 He had handed Sampras his worst defeat at the United States Open in 12 years, leaving the 13-slam champion without any major title for the first year since 1992.

Hewitt fell flat on his back, pumping his fists and screaming: “Yeah!” “Then, I sort of realised, ‘I’ve got to go and shake Pete’s hand,’” he said.

Hewitt picked himself up, shook Sampras’ hand and the umpire’s, then raised his arms to the crowd, looking dazed and awed by his own achievement.

There was a sense of a changing of the guard as the 30-year-old Sampras, in his traditional white shirt and white baggy shorts, bowed to a new, 20-year-old champion in a flashy orange top and with his cap on backwards.

Hewitt said the significance of what he had done did not hit him until the on-court presentation ceremony.

“I’m standing there about to collect the trophy and Pete’s there holding up the runner-up’s plate!” he said, still with a hint of incredulity.

His coach, Darren Cahill, said later that he believed Hewitt would only get better over the next three or four years.

“Lleyton has a lot of improvement to make in his game, and if he’s prepared to do the hard work, I feel like he can become a much better tennis player,” Cahill said.

“In saying that then, there’s no reason why he shouldn’t be pushing for more grand slam titles.”

Hewitt’s Davis Cup captain, John Fitzgerald, agreed: “I never won a slam, but I’m sure the first one is the hardest. He can win a few now. He really can.” Sampras did his best work of the day after the match, with a gracious exhibition worthy of a champion. 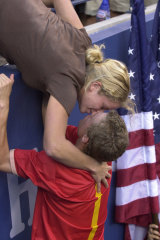 He called Hewitt the best returner and the best scrambler in the game – even better than his age-old foe Andre Agassi.

That is the highest compliment anyone could pay Hewitt. He idolised Agassi growing up and still has a huge poster of the American star on his bedroom wall at home in Adelaide.

Sampras said he could offer no excuses for his play. He did not play his best because Hewitt did not allow him to play his best.”

He passed and returned as well as anyone I’ve played,” Sampras said. “He’s got the best return in the game, the best wheels in the game. He possesses now a much better serve.

“He’s a great player. You’ll see him contending here for the next 10 years.” Hewitt, the fidgety, intense baseliner from Adelaide, carved at “Pistol Pete’s” feared service, rifling it back at the American’s feet and slapping it down the line and across court in one of the most impressive displays of returning witnessed in a grand slam final – let alone a first appearance in a final.

A blustery wind made serving difficult at both ends, yet it was Hewitt’s serve, considered the weakest point of his game, that held up best.

Rather than going for pace, he shifted the ball around in the service box, keeping Sampras thinking and zipping seven aces past him. Hewitt won 84 per cent of the points on his serve and restricted Sampras to 63 per cent. The American could also manage only 11 aces.

“The harder I served, the more I put into it, the better he returned,” Sampras said.

Sampras was left looking hopelessly isolated in mid-court, as Hewitt’s passing shots repeatedly found their mark. Once Sampras did get to the net, Hewitt consistently got the ball down at him, forcing Sampras to make tough low volleys – many of which inevitably went into the net.

The American tried to chip and charge to place pressure on his young opponent, but Hewitt picked him off almost every time with laser-like passing shots across court and down the lines.

The players exchanged service breaks in the first two games, then went on serve to a first-set tiebreak.

Hewitt hit a sizzling backhand pass at 4-3 in the tiebreak that seemed to surprise Sampras. The American began to hang his head after that point, and Hewitt did not let him lift it again, winning the tiebreak and breaking Sampras another five times in the next two sets.

Hewitt seemed remarkably composed for a 20-year-old in his first grand slam final. Even girlfriend Kim Clijsters said she was surprised at the intensity of his focus. “I’m just so proud he was able to win against such a good player as Pete,” she said. “He has known for a year he was good enough to win a slam, but the way he did it, the way he kept his nerves – I was so happy.”

Hewitt said he might not have looked nervous, but he felt it. “You’re not human if you’re not nervous in your first grand slam final,” he said.

Yet, he put himself in a zone where he allowed himself to concentrate on nothing but hitting the next ball.

Hewitt placed the win on a par with his Davis Cup demolition of world No.1 Gustavo Kuerten, on clay in Brazil. He said he would now concentrate on preparations for the Davis Cup tie with Sweden in Sydney this month, then focus on the grand slam tournament he most dearly wants to win – the Australian Open.