Novak Djokovic's self-obsession and narcissism have long been a double-edged sword.

Those traits have been among his greatest assets as he continues his trek towards the historic peak of the sport. When it's all said and done, in numbers at least, he may well be the greatest male player to ever take the court. 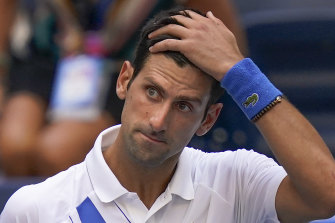 Novak Djokovic after he inadvertently hit a judge with a ball causing his disqualification from the US Open.Credit:AP

To state the obvious, this was a tournament there for the taking. Already thin on opposition amid the COVID-19 pandemic, Djokovic arrived unbeaten all year and virtually a good thing. Now he's departed in infamy after nonchalantly cracking a ball over his shoulder in frustration.

It's something he's done before. Many times. A video from four years ago shows him sparring with a reporter at a press conference and seemingly horrified at the notion that, one time, one of them might actually connect with someone's head.

Now it's come to pass and few in the sport are particularly shocked, nor saddened. At first, Djokovic tried to state his case to continue before the gradual dawning that he had zero wiggle room. To his credit, his concern seemed genuine and it was obvious the incident was careless, not intentional.

Always one to grasp the narrative by the horns, Djokovic declined a press conference and instead took what has become the cheapest option for an athlete amid a crisis: posting a heartfelt message on social media.

"This whole situation has left me really sad and empty," he wrote. "I checked on the lines person and the tournament told me that thank God she is feeling ok. I'm extremely sorry to have caused her such stress. So unintended. So wrong. I'm not disclosing her name to respect her privacy.

"As for the disqualification, I need to go back within and work on my disappointment and turn this all into a lesson for my growth and evolution as a player and human being."

It said all the right things but carried one hundredth of the weight of the spoken word. His detractors already feel that Djokovic is a man for when the going is good and promises of 'evolution' and 'growth' are as hollow as the ball that sent sailing towards the line judge's throat.

Already this year, Djokovic stated his opposition to mandatory COVID vaccinations once they become available and drove the creation of an absurdly-timed Adria Tour that made a jaunt through Balkans in June, only to create a COVID cluster amid leading players, one of which was the man himself.

In lieu of a mea culpa, Djokovic found a way to martyr himself in the face of staunch and largely justified criticism for being the prime mover of a series of events that were as irresponsible as they were ill-founded.

"I can only see criticism lately and much of it is malicious," he told Serbia's daily Sportski Zurnal soon after."It's obviously more than just criticism, it's like an agenda and a witch-hunt. Someone has to take the fall, a big name."

His siege mentality is so developed that it's a crying shame he hasn't been offered a role with a paranoid NRL club. As a result of the tour shambles, his role as the president at the ATP Players Council was impossible, so he simply stood down, then started a rival group with himself at the vanguard.

In the wake of this latest incident, John McEnroe told ESPN that it virtually ensured Djokovic would be perceived as the 'bad guy' for the rest of his career, if he wasn't already.

"The pressure just got to him I think. I think a lot’s been going on off the court. It’s obviously affected him and now whether he likes it or not, he’s going to be the bad guy the rest of his career,” McEnroe said. "It’ll be interesting to see how he handles it."

The truth is he will handle it without missing a beat, if not turn it all to his advantage. Circumspect at first, Djokovic will undoubtedly use the latest inbound criticism as fuel for his quest to pass Roger Federer's record of 20 grand slam titles.

When that happens – and it will – Djokovic can respond to his anti-fans by simply pointing at the scoreboard. It's a telling riposte.