Serena Williams will be back.

After her humbling semi-final loss to Naomi Osaka at the Australian Open, the questions came hard and fast. Had Osaka’s slashing forehands shouldered Williams to the edge of retirement?

Was this the last time Williams would grace the sea-blue courts of the Australian Open, a tournament she has won seven times? 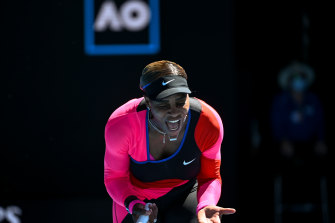 Serena Williams shows her frustration during her semi-final loss to Naomi Osaka on Thursday.Credit:Eddie Jim

At one level, those questions made sense.

What more, after all, does she have to prove?

There has never been, nor is there likely to be, another champion like Serena, who rose from Compton, California, to transcend her sport and become recognisable by the mention of merely her first name. How many more times can an athlete with Williams’ pride endure the sting of coming oh-so-very-close to winning the 24th grand slam singles title that would tie Margaret Court for the record?

The loss to Osaka — a much-hyped rematch of the pair’s infamous 2018 US Open final — had a familiar feel. In her prime, Williams possessed an unrivaled ability to summon genius whenever it was needed most. But since her return to tennis after maternity leave that year, she has not won a major. Twice she has lost in a grand slam semi-final and four times in a final.

Given the combination of her sterling past and murky present, there is a tendency among the commentariat to parse her every gesture and utterance for signs that she might soon quit. When she walked off the court after losing to Osaka on Thursday, she paused briefly, put a hand on her chest, smiled and waved at fans as they showered her with an ovation. It wasn’t all that different from the thankful gesture she has made after matches for decades. But in the rubble of another disappointment — and considering she is now 39 and a veteran of nearly a quarter-century on the tennis tour — it was a display many onlookers took to have a deeper meaning.

“I think with that little move we saw from Serena just now, that might be the last time we see her here on Rod Laver Arena,” said a television announcer, watching it all unfold.

But was that wave a final goodbye?

“I don’t know,” Williams said in her post-match news conference. “If I ever say farewell, I wouldn’t tell anyone.” A few moments later, struggling to stay composed, she abruptly left the dais.

Serena fans, I don’t think you should worry. She is not about to give up the chase just yet. I wouldn’t read too much into a post-match wave or despondent answers to the news media. She has never been one to hide her emotions. She wears victory with high-wattage smiles and prancing giddiness. She wears defeat with slope-shouldered and bone-weary disdain.

Had she suffered through a loss like this and then dispassionately discussed two sets of misery, then I’d wonder about her playing much longer. But that’s not what happened here.

If the past is a reliable guide — as it has been since her first professional match, a dismal loss in a low-level event when she was only 14 — she will come up with a way to bounce back. She will rationalise defeat and tell herself she could have beaten Osaka if only she had avoided easy mistakes. She will summon energy from anyone now questioning her ability to win on the biggest stage.

She will focus, too, on how well she played in Melbourne up until that loss. The coronavirus pandemic allowed extra time for Williams to heal, clear her mind and renew her spirit. She came into the tournament in her best shape since returning from maternity leave. In the quarter-finals, she pummelled Simona Halep, who had defeated Williams handily in the 2019 Wimbledon final.

Williams played Halep on Tuesday with a vengeful clarity not seen in years. Watching the match unfold, I couldn’t help but think of the Australian Open final in 2009, when she destroyed Dinara Safina, 6-0, 6-3, in just under an hour. Williams was 27 then. She won her 10th grand slam singles title.

A few days after the tournament, I went to her Los Angeles condominium for an interview. I won’t forget the moment when I remarked that the win over Safina was one of the quickest in grand slam finals history — and she cut me off immediately. “Fastest in two years,” she said, a glint in her eyes, before reminding me she had beaten Maria Sharapova in a similar fashion at the Australian Open in 2007.

The greatest champions remember everything. They are keenly aware of what they have done and what’s still out there to prove. They grow so used to overcoming opponents that motivation comes mostly from chasing history. That’s why a 43-year-old Tom Brady won’t stop after winning a seventh Super Bowl title. It’s why LeBron James won’t stop at age 36 — while he is two NBA championship rings behind Michael Jordan. And why Roger Federer will soon return to tennis after recovering from a knee injury at 39.

Williams is made of the same stuff. The long-ago past is her only real opponent. Court’s record, 24 singles slams won in the 1960s and ’70s, is still out there, waiting to be tied and perhaps surpassed. And Williams, to her credit, keeps putting herself in contention, keeps putting herself on the line, even if it means sucking up searing defeats.

The road will only get rockier, what with all those miles on the legs and years on tour. Hungry young opponents now sit in every corner of every grand slam draw. They seem more confident all the time and less in awe of the woman most of them grew up idolising. Osaka, for one, has forged herself into a carbon copy of a young Serena: same power, same moxie.

When Osaka found herself struggling toward the end of the second set of the semi-final, she responded with a burst of domination that recalled Williams at her peak: Eight straight points, and it was over.

If you think Williams wants to go out like that, think again.