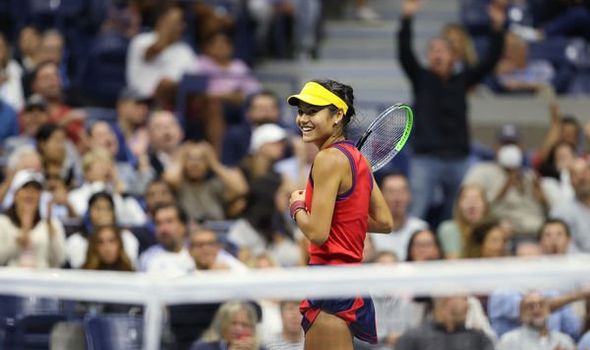 Not since 1977 has Great Britain held an interest in a major women’s singles final. Wimbledon was the location for Virginia Wade’s third and final Grand Slam triumph, but it will be on the other side of the Atlantic where a 44-year wait could come to an end on Saturday night.

Wade has been in attendance in New York this week, and the 76-year-old tipped Raducanu as a possible contender for the title before her quarter-final win over the Olympic champion Belinda Bencic. By that point, the highest-ranked player Raducanu had faced in the draw was the world No.41 Sara Sorribes Tormo. She’s now beaten two top-20 players in the space of 36 hours.

Of the aspects that have been most impressive about Raducanu’s form in New York, her ability to respond to early setbacks is right up there. The teenager lost her opening service game against both Shelby Rogers and Bencic before recovering to record comfortable wins in the last-16 and quarter-final respectively.

Raducanu faced three break points in her opening service game and four in her second against Maria Sakkari. She did not cede, and she broke Sakkari in between. She led 3-0, and then she broke again.

By the 30-minute mark the sixth-best player on the WTA tour this year had still not registered on the scoreboard. Sakkari held at the third time of asking but Raducanu has made a habit of making big moments look routine and she held to 15 to seal the first set in just 37 minutes.

Sakkari held to love in the opening game of the second set but it did not take long for Raducanu to turn the screw again. In just 12 matches on the tour — all of which have come this year — Raducanu has developed a reputation for being an incredible returner, and an aggressive backhand from the teen secured another break.

Leading 3-1, the world No.150 had two points for a double break but Sakkari reeled off four successive points to stay within touching distance of her opponent. A weaker player’s nerves might have shown at that point. Raducanu held to love, before failing to convert on five more break points. Then she held again. And at 5-4, she nervelessly held again to secure her place in Saturday’s showpiece.

Awaiting Raducanu in the final is another teenager, the Canadian Leylah Fernandez, after she overcame Belarusian second seed Aryna Sabalenka in a gruelling three-setter.

Fernandez’s run to the final has, on paper, been even more impressive than Raducanu’s, with third seed Naomi Osaka, fifth seed Elina Svitolina and 2016 US Open winner Angelique Kerber all falling to the 19-year-old.

We are witnessing the dawning of a new age in women’s tennis, and Raducanu is, clearly, a huge part of it.