Sydney tennis fans will get the chance to watch Nick Kyrgios in person for the first time in three years after the Australian earned a wildcard entry to the Sydney Tennis Classic.

Kyrgios has not played in Sydney since the first ATP Cup in 2019, but will complete his Australian Open preparation at the lead-up tournament from January 9, following his return to the court in Melbourne.

The 26-year-old is a headline attraction at any tournament, but the absence of Roger Federer, Rafael Nadal and, in all likelihood, Novak Djokovic this Australian summer will put Kyrgios in the spotlight more than usual.

If the “Big Three” don’t take part in the Australian Open, Kyrgios believes it will be a “disaster” for fans. Dominic Thiem, who reached the Australian Open men’s final in 2020, announced late on Tuesday he wouldn’t be competing next month as he continued to recover from a wrist injury. He said Melbourne held great memories for him, and he looked forward to returning in 2023.

“I honestly don’t know Novak’s current situation with anything COVID related or what he needs to play,” Kyrgios told the Herald and The Age.

“I hope he’s had a good Christmas and I hope he’s able to play in the sport for as long as possible, because I’ve voiced before I think Federer, Nadal and Djokovic need to be [playing]. 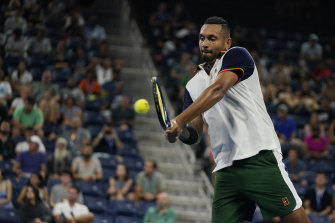 Nick Kyrgios has been recovering from a knee injury for three months.Credit:AP

“If all three aren’t there, it’s a disaster. It’s an absolute disaster for the fans and the people that enjoy tennis.

“Yes, it’s obviously a good opportunity for some of the younger guys to come through and make an impact but, as a whole, we do need them to be part of the sport.”

Kyrgios has not played on tour since the Laver Cup in late September, citing a knee injury as the primary reason for his return to Australia.

He has spent three months rehabilitating, as well as spending time with family and friends.

“My knee is something that has been hindering my career for a while now, it’s just something I had cleaned up last year and it feels good,” Kyrgios said.

“I’ve been training a lot, I’ve been on court a lot. I’ve been playing a lot of basketball. I’ve just been living my life and doing what I want really.

“I’ve been doing a lot of gym, but I feel like every human should be doing gym to some extent to feel good and just to feel healthy. But yeah, I’ve been enjoying my tennis. I’ve had my guys around me in Canberra, some of my closest friends.”

Kyrgios’ absence from the ATP Tour means his world ranking has slipped to No. 93. Alex de Minaur, James Duckworth, Alexei Popyrin, John Millman and Jordan Thompson are in front of him in Australia’s ATP Cup team.

It’s a blow to Kyrgios, who has spoken openly about his desire to play in team events.

“I like playing the ATP Cup of course, but I’m happy for everyone’s success in that team,” Kyrgios said.

“They’ve all worked hard, they have put in the hours and put in the results. I think we’ve got a very strong team and we are capable of doing some very good things there.”

Kyrgios did not put a ceiling on his goals for the Australian summer, but promised a show for those who pay for a glimpse of his colourful on-court game.

“I haven’t been thinking about anything about the Aussie summer at all,” he said. “I go day by day. There’s so many things I look forward to every day, so we’ll see.

“I want to enjoy myself. I want to be happy and that’s it.”