Alex de Minaur has returned to Australia’s Davis Cup team for the finals in Italy next month.

De Minaur, who missed Australia’s last tie against Brazil in March 2020, was named on the team on Tuesday along with John Millman, Jordan Thompson, Alexei Popyrin and doubles specialist John Peers. 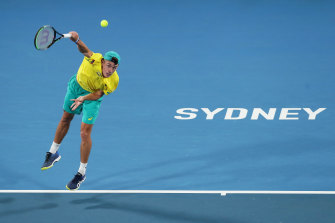 Australia’s No.2, the 51st-ranked James Duckworth, was omitted.

The team will travel to Turin to compete in the group stage against Croatia and Hungary from November 25.

“We will be led by our No.1 Alex de Minaur, who has had a really consistent three to four years on the tour and has established himself as a top player,” Australia captain Lleyton Hewitt said in a media release.

The six group winners and best two second-placed teams advance to the quarter-finals of the 18-team tournament, last won by Spain in 2019.

Last year’s finals were postponed due to the COVID-19 pandemic.