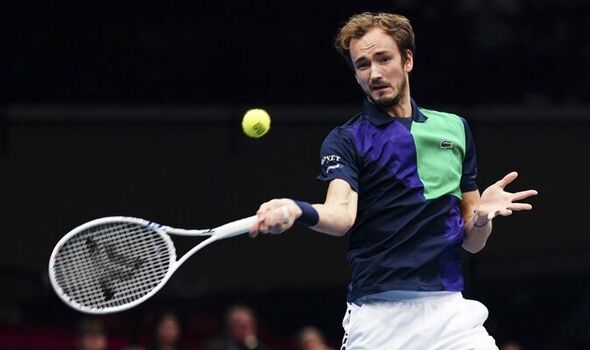 Dominic Thiem’s run at his home tournament in Austria came to an end at the hands of Daniil Medvedev in the second round. The top seed booked his spot in the quarter-final with a straightforward 6-3 6-3 win over the former world No 3 in what is just his second match since becoming a father earlier this month.

Thiem and Medvedev were facing off for the sixth time but the first since the Austrian’s lengthy injury layoff last year. The former world No 3 had made it into the second round by the skin of his teeth after going 1-4 down to Tommy Paul in the final set of their clash and saving two match points for a 2-6 7-6(2) 7-6(6) win in his opener.

The top seed posed an even bigger challenge for the 29-year-old but he started strong, staying with Medvedev for the first six games of the match. The pair then found themselves embroiled in a scrap in a five-deuce game before Thiem finally succumbed to the world No 4, with Medvedev breaking on his fourth opportunity.

The 26-year-old went into another gear after taking a 4-3 lead, saving one break point in the following game before breaking the world No 113’s serve yet again to take the first set 6-3, hitting just eight unforced errors to Thiem’s 17. Medvedev carried his momentum into set number two, starting with a love-hold to win his fifth-successive game.

JUST IN: Andy Murray crashes out of Swiss Indoors Basel with straight-sets loss

Thiem was able to get himself on the board for 1-1 but looked deflated compared to the first half hour of the match, finding himself broken once again as the Russian took a 3-1 lead and began hurtling towards the quarter-final. The home crowd were desperate to rile up their man as Medvedev served for the match at 5-3, prompting the pantomime villain inside him to come out as he stuck his tongue out at the fans after winning a lengthy rally to go 30-15 up before sealing a 6-3 6-3 victory in 97 minutes.

Medvedev will now face either Francisco Cerundolo or Jannik Sinner in the quarter-final. The top seed is playing his first tournament since retiring to Novak Djokovic out of nowhere in their Astana Open semi-final less than three weeks ago, later revealing he felt something “pop” in his adductor despite not looking to be in any physical discomfort.

Arriving in Vienna this week, the world No 4 confessed that he was unsure he would even be fit enough to compete this week until a crucial practice session on Saturday, which showed him he was “100 per cent ready” and made him decide to fly to Austria.

Thiem is still battling his way back up the rankings and has been hoping to return to the top 100 before the end of the season. He may have just one more chance after receiving a wildcard into the qualifying event at next week’s Paris Masters, where he is a former semi-finalist. The 29-year-old had reached two consecutive semi-finals at his last two events in Antwerp and Gijon but was unable to progress to the same stage at his home tournament in Vienna.