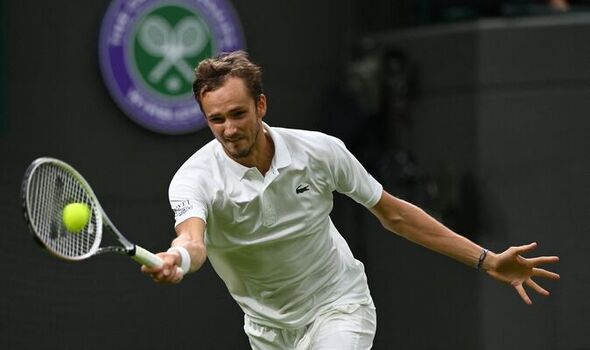 Daniil Medvedev has added a grass-court tournament to his schedule following claims Russian players will be banned from Wimbledon. The world No 2 is currently out of action following hernia surgery and was expected to be back for the grass season but faces a big blow after reports claimed there would be a Wimbledon ban for all Russian and Belarusian athletes.

There have been talks of Russian and Belarusian players being banned from Wimbledon this summer for several weeks amid the war in Ukraine, and on Wednesday reports claimed this ban had been finalised, with the tournament’s annual press conference taking place next week. It means world No 2 Medvedev will be barred from the event as well as a host of other top players including Andrey Rublev and Aryna Sabalenka.

Despite the ban reportedly being confirmed, the 26-year-old has added a grass-court warm-up event to his schedule in the days leading up to Wimbledon, as the latest name to be confirmed for the Libema Open taking place from June 4 – the week after the French Open. Medvedev is currently sidelined following hernia surgery and is expected to miss all of the clay swing, meaning the only Grand Slam tournaments he may end up playing this year will be the Australian Open, where he reached the final, and the US Open, where he is the defending champion.

Following the announcement that he would be competing in the Dutch ATP 250 event, the US Open champion said: “I am looking forward to coming back to the Netherlands and playing in ‘s-Hertogenbosch. I love playing on grass and the relaxed atmosphere that Libéma Open is known for.”

Despite his “love” for the grass, the world No 2 looks set to be denied the chance to compete in the prestigious Grand Slam on the surface this summer. He last won a grass-court title in Mallorca back in June and then went on to enjoy a career-best showing at Wimbledon, making the fourth round, but it is unlikely he will be able to defend his points from the round of 16 this year.

Sports Minister Nigel Huddleston initially proposed Russian players be allowed to compete if they provided “assurances” denouncing Putin and the war, with a potential plan for the athletes to sign a “declaration”. But according to the New York Times, Wimbledon will be imposing a blanket ban to stop players being forced to declare their allegiances and views.

It comes after claims that the All England Club would be able to impose the ban themselves as a private members’ club, allowing for more freedom in decision making compared to the likes of the ATP Tour. Russian and Belarusian tennis players have been competing as neutrals for almost two months, after the ATP, WTA, ITF and four Grand Slams announced the joint decision in the wake of the invasion of Ukraine.

The Russian and Belarusian teams have also been banned from the Davis Cup and Billie Jean King Cup – the men’s and women’s ‘world cup of tennis’ – where Russia is the defending champion of both events. The joint ATP and WTA tournament held in Moscow each October has also been cancelled for the year, but a ban from Wimbledon will be the strongest stance seen yet in the sport.