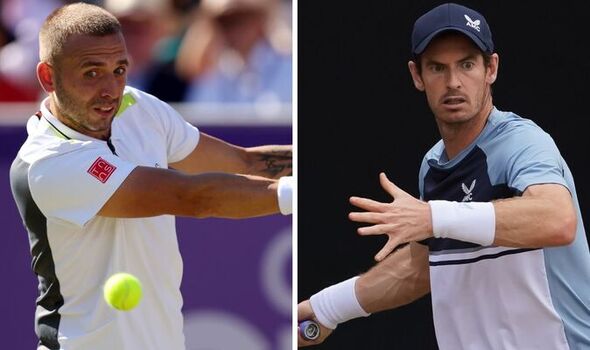 Dan Evans has given an update on Andy Murray’s fitness after practising with the former world No 1 at the All England Club. Murray was forced to withdraw from Queen’s when he suffered an ab injury in the Stuttgart final but has been back on the practice court under the watchful eye of Ivan Lendl after reuniting with his former coach.

Murray pulled out of Queen’s last week after a scan confirmed he had suffered an abdominal strain during his Stuttgart final against Matteo Berrettini. And Evans was the Italian’s next casualty as he lost to him in the opening round at Queen’s, with the British No 2 making up for it by getting some practise in at the All England Club.

“I hit with Andy so it was pretty familiar surroundings,” the world No 3 said of his hit at SW19. “It was nice to see everybody. I’ve not seen those guys for a little while. I saw Ivan, obviously, the fitness trainer and all his team. I obviously didn’t see him at Surbiton or since Madrid. It was nice to see everybody again and have a good practice.”

While Evans admitted he didn’t discuss the world No 51’s injury with him, he explained that Murray looked good in their session. “I mean I thought he was playing pretty well. I’m not going to comment on if he thinks he’s playing well but he played well against me,” he said.

“I’m not sure how the injury is. It’s not something we spoke about. He seemed fine when we practised but, obviously, I can’t be sure. It was a good practice, good fun.” Murray also linked back up with former coach Lendl following the Miami Open this year, where he skipped most of the clay season and underwent a training block to prepare for the grass.

Touching on their third partnership together, Evans said: “I think he’s happy to have Ivan back and it looks like it’s really working.  They were smiling, the pair of them.” Fellow Brit Cam Norrie also backed his compatriot to be one of the guys to beat at Wimbledon despite his injury struggles.

The British No 1 said: “He obviously loves the grass so for me I think he is going to be very tough to beat at Wimbledon, always is. I have a lot of respect for him and in the last couple of years I think he would probably like to do a little bit better, results-wise, and I think it’s a lot of respect for him to keep going and he is not really thinking or caring too much about what other people think.

“He’s just going out there, taking care of his business and keep attacking every week and keep going for it and he is starting to get rewarded, especially in Stuttgart. A little bit unlucky there in the final to pick up a little injury. But he has made two finals already this year and he is going into Wimby with a week’s rest and a week’s practice and he’s going to be tough to beat and looking forward to seeing how he goes.”