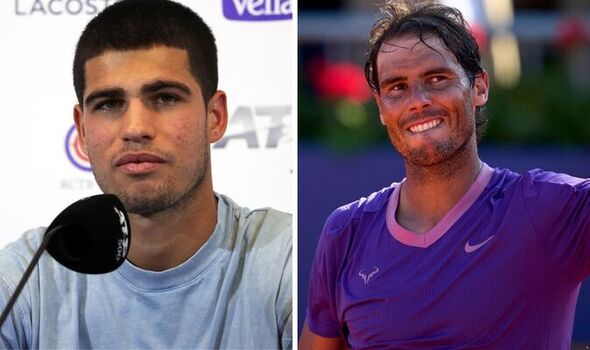 Carlos Alcaraz has been told he must “learn to deal with” his newfound fame and hype after causing the same type of frenzy as Rafael Nadal at the Barcelona Open. Former world No 2 Alex Corrteja warned his fellow Spaniard that his week at the ATP 500 event would be “very important” but admitted he had no doubt that the 18-year-old would learn to handle the pressures of becoming a top player and big star in his home country.

Alcaraz recently made history as the youngest man ever to win the Miami Open, a month shy of his 19th birthday. The world No 11 is now back on home soil for the first time since becoming a Masters 1000 champion as the fifth seed at the Barcelona ATP 500, three years after he arrived at the event as a 15-year-old qualifier and lost to Pedro Sousa.

Three years later, he is the hot ticket in Barcelona as the world No 11 and recent Miami Open winner, and retired former pro Alex Corretja has fired a warning to the teenager who is causing Nadal levels of frenzy at the tournament. “It’s a new life for Alcaraz. I mean he’s not the same as two months ago or not even two weeks ago,” the two-time French Open finalist told Eurosport.

Explaining how the home crowd was going “totally crazy” for the 18-year-old, he continued: “He is creating in Barcelona the same feeling as we had with Nadal 10, 15 years ago where everybody wanted to see Nadal like ‘oh, Nadal is coming’. So it’s like ‘okay, Alcaraz is playing Wednesday at 4 o’clock in the afternoon.’ Everything is sold out, everybody wants to go and see Alcaraz.”

Corretja said the Miami Open champion would need the help of his coach, former world No 1 Juan Carlos Ferrero, to learn to deal with the noise while being the man everyone wants to see at this week’s tournament. He explained: “That’s very difficult to deal [with], to swallow and to understand.

“I believe it’s very important he’s got Ferrero next to him that he’s explaining [to] him how to deal with the situation but you see that people are getting totally crazy when he walks around and they want to see him practising, they want to take a picture with him, they want to have an autograph from him. And this is totally a different situation for Carlos so I think he needs time to just avoid all the things that are going on from the outside and just to focus on what he needs at the end, which is to play. It will take him a little while but I have no doubt that he will find a way to manage all [of] the situation.”

The former coach of Andy Murray also admitted he thought Alcaraz should have skipped Monte Carlo last week, where he lost a tight three-setter to a tough opponent in Sebastian Korda in his opening match, and given himself a break before Barcelona. “It’s easy to say now but I was personally believing and thinking that he probably could skip Monte Carlo and just rest and have fresh air and get ready again for the clay court season.

“But that’s very difficult to do when you’re on a roll, when you’ve got the momentum, when you are on fire as he was. So it was not an easy decision of course I’m sure that they’ve been thinking about it but how do you tell a guy, 18-years-old, okay you just won Miami but now lay down and relax and sit back and wait for the next tournament to come in Barcelona.” Alcaraz plays his opening match in Barcelona against Soonwoo Kwon on Wednesday afternoon.