Australian Open boss Craig Tiley feared the tournament’s grand slam status could have been at risk, leaving the door open for other countries to poach the event, if the Victorian government had bowed to pressure to cancel it.

The Open will get under way on Monday at Melbourne Park, which will be open to crowds of almost 50 per cent capacity each day, following a massive logistical effort to quarantine the players and their entourages. 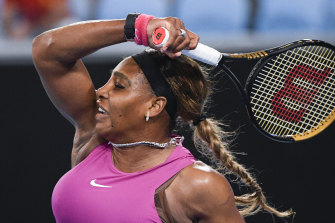 Serena Williams on court in Melbourne on Friday.Credit:AP

Officials have had to overcome several hurdles that threatened to disrupt the tournament, including passengers on Australian Open charter flights testing positive to COVID-19 forcing more than 70 players into hard lockdown.

Tennis Australia and the Andrews government have also weathered a storm of criticism over the decision to allow tennis players into the country while Australians were stranded overseas, and from some players who objected to the harsh quarantine measures.

However, Tiley said cancelling the Open would have been “catastrophic”, and would have opened the door for rival countries to steal it.

“If you cut the momentum short and you don’t run an event, you start the journey, the slippery slope of going back to where we were in the ’70s and the ’80s,” Tiley said.

“The reason why the Australian Open moved from Kooyong to Flinders Park under John Cain’s leadership as Premier is because they were losing their status as a grand slam.

Tiley said people should not be complacent about Melbourne’s hold on the Open.

Last month, Premier Daniel Andrews said the tournament could be lost to the likes of Japan, China or Singapore if the grand slam didn’t go ahead at Melbourne Park this year.

“It wouldn’t be next year we didn’t have the grand slam, but it wouldn’t take much more to lose it,” Tiley said.

“And you lose it because someone in Shanghai or Tokyo or wherever says: ‘OK. We’ll have an event, we’ll offer $75 million in prize money, we’ll do it for two weeks, we’ll get all the top players. It’s a safe environment and an easier flight.’

“You lose momentum. I think the medium term effects would be catastrophic.”

Melbourne Park is contracted to host the Australian Open until 2039 and the facility is approaching the final stages of what is close to a $1 billion redevelopment, heavily supported by the Andrews government.

But Tiley says that doesn’t preclude others trying to snatch the tournament away from them.

“Our biggest contract is to get the players to Melbourne in safe conditions so they can play.

Tiley said people should not be complacent about Melbourne’s hold on the Open.Credit:Eddie JIm

“COVID in the next 12 to 18 months will kill off events like we knew them before. They won’t exist.

“This event, because it survived the COVID onslaught, will be looked at as a shining light that continues to grow.”

The tournament hit another hurdle last week when a positive COVID-19 test returned by a hotel quarantine worker sent 507 people – many of whom were players – into isolation again as they awaited test results. All returned negative tests but warm-up events were put on hold and the Open draw delayed by 24 hours.

Tiley said the ability to stage a two-week global tennis tournament under these circumstances would prove to be extremely beneficial for the reputation of Melbourne and Australia.

“The world is not going to believe it,” Tiley said.

He also said it would help convince the public that such an event could be held safely.

“Maybe we can speed up the psyche, speed up the change in that apprehension to be more positive. It’s being a beacon and a signal of saying this can be done.”

Other Australians in action

WATCH LIVE ON CHANNEL NINE, NINE GEM AND NINE NOW FROM 10am ON MONDAY FEBRUARY 8.