At the time, Federer was the best player in the world. But it wasn’t just results which drew a young Tsitsipas to the Swiss master.

Federer is adored because he’s stylish on the court and carries himself with class off the court. Rafael Nadal is idolised for similar reasons. He is relentless on the court, and as warm an athlete as one will find off it.

They’re traits the Australian public crave, and part of the reason Novak Djokovic has never been universally loved in the country in which he has enjoyed unrivalled success.

Tsitsipas fits into the same category as Federer and Nadal. His one-handed, Federer-inspired backhand oozes class. He has the same long locks that Federer sported early in his career. He also has the same, graceful movement across the court – a Federer trademark.

“It’s an unbelievable thing to be an amazing athlete and to see Roger do so much in philanthropy and Rafa, he has his own academy which gives thousands of kids the chance to follow their dreams. 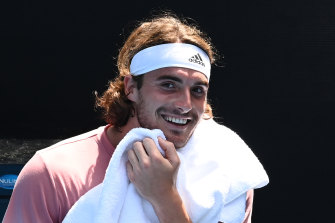 Stefanos Tsitsipas has a wide range of interests outside of tennis.Credit:Getty

“They have inspired millions of people around the globe. At the end of the day, that’s what it’s all about.

Federer and Nadal are likeable for the way they carry themselves on the court as well as off it, but Tsitsipas knows they wouldn’t be two of the few true superstars in world sport had they not won 40 combined grand slams.

The world No.4 was two sets up and within reach of winning his first major at Roland Garros last year, against Djokovic. Then came the trademark comeback from Djokovic. It’s a result which would haunt almost every other player on tour.

“When you are playing for your first grand slam title and you’re that close to winning it, it’s not unusual to feel upset, and feel like you lost an opportunity. That’s normal,” Tsitsipas explained.

“I obviously had a big lead on the score, and on the psychological part of the game, too.

“There is definitely something that you’re doing right, in order to be in that position. Having that taken away from you can be very difficult, but there is more for me to learn from that final than there is lose.

“I think, mentally, I’m more ready now than I was back then for this to reoccur and happen again, if it does happen. Back then, I would never have thought the match would turn around like that and go against me. Especially after playing such a good first two sets. I started in the best possible fashion.

“I was just playing my game, enjoying my game on a very nice Parisian day and enjoying my presence on the court. Not many thoughts were going through my head, or racing.

“Novak, after leaving the court two sets to love down, he cleared his head. He had different intentions than before. He loosened up. That contributed a lot to his success later in the year.”

Tsitsipas’ ability to brush the result in Paris aside is partly due to a comeback of his own.

At last year’s Australian Open, he became just the second player to beat Nadal after dropping the first two sets.

That performance, and his creative interests – which include photography, filmmaking and music – off the court, keep the 23-year-old sane.

“I like doing this stuff because at the end of the day, I am going to put in the work on the court and that is going to take up the majority of my time, perfecting my craft,” he said.

“But I want to have fun outside of tennis, exploring my other interests outside the court. I see that as personal growth, very much. I like when I see growth.

“I like when I see myself becoming a better human being, learning more things about anything, really. I think that can also have a very positive impact on my tennis.

“If I know in the back of my head I have other interests and talents and things I like doing on the side, it puts me at ease on the tennis court.

“These two are different to one another, but there is definitely more to life than tennis. Not to say tennis isn’t important. It’s very important.

“But I want to explore my options. I don’t want to live a monotonous, one-sided life, sacrificing 110 per cent of my day and focusing entirely on tennis.

When Federer and Nadal call time on their decorated careers in the next few years, the Australian public will be searching for a new player to adopt and adore.

Tsitsipas is ready to step into the hole left by his childhood idol.

“It’s made my life difficult when I go to public places, I won’t lie,” he said. “Sometimes, it’s uncomfortable having a lot of people walk up to me. But I like it at the same time.