Tennis Australia is set to confirm the February 8 start date of the Australian Open and announce details of crowd sizes and ticket sales to the tennis event.

The announcement will be the culmination of an intense period of negotiations between Tennis Australia boss Craig Tiley and the state government, which CBD hears is going to be shoring up the event to the tune of tens of millions of dollars. 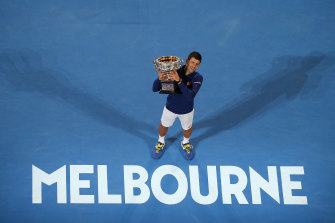 The Australian Open is set for a February start.Credit:Alex Ellinghausen

The bailout was needed after Tennis Australia agreed to pay for player and support staff quarantine costs, meals and accommodation as well as charter flights to get the athletes to Melbourne.

As part of the deal, CBD understands that Tennis Australia has agreed to extend its long-term deal with the state government.

This will keep the tournament at Melbourne Park for an additional three years past the expiry of the present contract.

The announcement will be quite the victory for Tennis Australia president Jayne Hrdlicka, whose new day job as chief executive of Virgin Australia is keeping her occupied.

Tiley has previously confirmed that the tournament will pay the full $71 million prizemoney.

Players are due to arrive via chartered flights from January 15 and quarantine in a tournament bubble that will allow them to keep training.