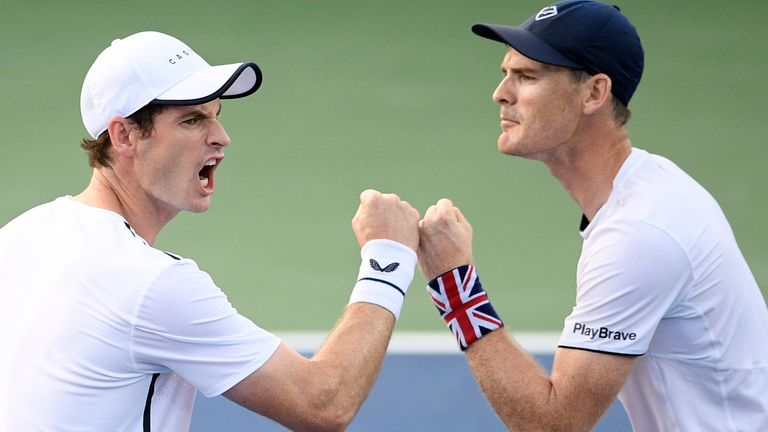 Jamie Murray says brother Andy is just pleased to be back playing matches – even at Challenger Tour level – after missing out on competing at the Australian Open.

Three-time Grand Slam champion Andy Murray withdrew from this month’s first Grand Slam of the season in Melbourne after being unable to find a “workable quarantine” following a positive coronavirus test last month.

Instead, Andy, 33, began his 2021 season with a victory against world No 203 Maximilian Marterer at a lower-level tournament in Biella, northern Italy in front of a handful of people on Tuesday.

“He is just excited to be able to play because he couldn’t go to Australia,” Jamie said.

“He trained so hard for 10-12 weeks in the off-season to be ready to go to Australia and he couldn’t.

Andy Murray happy with his start to 2021 👏 pic.twitter.com/sdss78Frer

Andy Murray is playing competitively for the first time this week since October and will face Italian Gian Marco Moroni, world No 234, on Thursday at the indoor hard-court event.

The former world No 1 is in his second Challenger Tour appearance in three years, after reaching the quarter-finals in Majorca in 2019 on his comeback from a second hip operation.

Jamie Murray added: “He is amazing like that. He doesn’t have an ego to say I am too good to go and play a Challenger tournament. He is happy to be there and compete.”

The two-time Wimbledon champion has now missed nine out of the last 13 Grand Slams, but Jamie says there is “no reason to think” his younger brother will not be at All England Tennis Club this summer, fitness permitting.

Wimbledon organisers are prioritising preparations for a reduced-capacity Championships.

Jamie was speaking after he reached the second round of the men’s doubles alongside Brazil’s Bruno Soares on Wednesday.

The 2016 champions, who have reunited this year, won 7-6 (8-6) 6-3 against Briton Cameron and his American partner Marcos Giron.

There was also further success in the doubles as Dan Evans, beaten by Norrie in the singles, progressed to the second round alongside Moldova’s Radu Albot.