Victorian Premier Daniel Andrews has called on Tennis Australia to set up a review process to scrutinise any medical exemptions to vaccinations that are granted to tennis stars arriving for the Australian Open.

Amid intense scrutiny about the steps involved in granting medical exemptions for professional athletes, Tennis Australia has confirmed that no exemptions have yet been given to players set to arrive from late December. 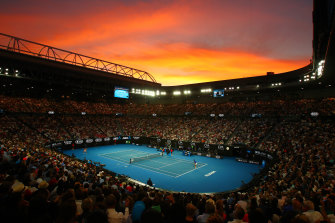 Players must be fully vaccinated or have a medical exemption in order to compete at January’s Australian Open.Credit:Getty Images

The status of players will become clearer on December 28, the next deadline for players to commit to the first major of 2022, starting at Melbourne Park on January 17.

Tennis Australia had already moved to distance itself from any attempts by players to seek medical exemptions, stressing those decisions are made by Australian health authorities.

Full vaccination will be compulsory for all attendees at Melbourne Park next month – players, staff and spectators.

“I think it is important that if Tennis Australia do move to a situation where they want to check the bona fides of any exemption – and I’m not talking about any individual – anyone who has an exemption, then that’s an appropriate safeguard,” Andrews said.

“Everyone sitting on centre court [at Melbourne Park] will have to be double jabbed. Out of fairness to them, out of respect for so many Victorians, [with what] the vast majority of Victorians have done, we have to have confidence in these arrangements.

“Tennis Australia have a role in protecting the integrity of these arrangements.”

Tennis officials have rejected the notion, raised in a media report this week, that world No.1 Novak Djokovic had their support to bid for an exemption and avoid vaccination.

Djokovic has refused to specify his vaccination status, on privacy grounds. The Serbian champion has been included among the main draw for the Australian Open, as well as the ATP Cup, starting in Sydney on January 1.

Tournament boss Craig Tiley has been at pains to stress that the Australian Open was removed from the process to assess exemption applications.

“Just to be clear up front, no one can play the Australian Open unless they are vaccinated – either a double dose of the required vaccines, or a single dose of Johnson & Johnson, which is an approved vaccine,” Tiley told the ABC.

“The only condition outside of being vaccinated that you could compete is if you receive a medically approved exemption from Australian authorities, against the very specific ATAGI [Australian Technical Advisory Group on Immunisation] guidelines. It’s very clear, there’s no loophole. There’s no condition that you can play the Australian Open unless you meet that criteria.

“Ultimately there is an independent panel of specialists, of medical specialists, and they see a blind copy of the medical exemption request.

“That goes to that expert panel, and they will make the call.”

But the Victorian government has indicated that an additional review process would be an “appropriate safeguard”.

When asked about Djokovic’s status, Andrews said he would not comment on individuals.

“If someone gets and exemption, then that’s not really a matter that I can change. So that’s out of my hands,” Andrews said.

“What I can say though is that you guys have reported a lot of some exemptions [for COVID-19 vaccinations] that have been granted in very questionable circumstances. That’s just a matter of public record.

“The second point I’d make, I’m briefed that Tennis Australia are looking very, very closely [at] whether they might put in place a review mechanism with for instance a panel of medical experts to review any exemptions that were granted. And I fully support that.

“If Tennis Australia go down the review process to check that all exemptions – and I won’t comment on any individual – that any exemptions were appropriate, then I think that would be a very good step.”

Tiley also indicated that the process involved in granting access to Melbourne Park for spectators with medical exemptions was still being finalised with the Victorian government.