Justin Langer has declared Cameron Green will make his Test debut in Adelaide on Thursday as long as he has recovered fully from a concussion suffered while bowling at the SCG last Friday.

The Australia coach said on Tuesday a final decision on who would open in the first Test against India not been made, although he ruled out any chance of Marnus Labuschagne being promoted to the top of the order. 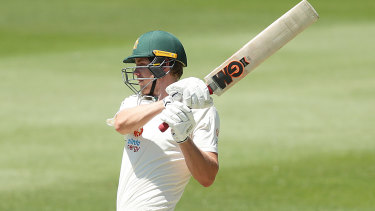 Cameron Green is on the brink of a Test debut.Credit:Getty Images

However, with the inclusion of Green it appears a middle order player will have to stand in as an opener and while he didn't confirm it would be Matthew Wade, Langer said the Tasmania captain would be able to handle the responsibility.

Asked about Green, Langer said he would be chosen as a batsman first and foremost, rather than an all-rounder. 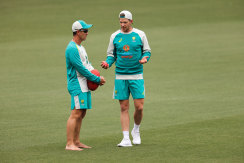 "He had another test this morning that we got good news on. He's a terrific young bloke and and an excellent talent. He's earned the right for selection.

He's a terrific young bloke and and an excellent talent. He's earned the right for selection.

"Cameron might bowl a few overs but he's earned the right purely through weight of runs and that's a great credit to him as a young player."

Green, 21, scored an unbeaten 125 against India for Australia A at Drummoyne Oval in Sydney last week.

Moises Henriques has been drafted into the squad as a back-up for Green, who will begin training with the Test squad on Tuesday.

Langer said he had publicly and privately backed the out-of-sorts Burns but his dearth of runs so far this season also had to be a consideration.

"There are a lot of balls in the air," he said. "[Burns] is a very good player. You don't lose your talent overnight. He also understands that runs are the greatest currency of any player.

"He's been a bit light on but we'll get eyes on him and see how he's going today. We'll make our decision on who's going to open in the next day or so."

Labuschagne and Wade had been mentioned as the most likely candidates to open and allow Green to slot into the batting order but the coach said "Marnus won't be opening".

"We're going to try and stay as settled as possible while Davey [Warner] is injured. At the moment we've got Joe Burns and Marcus Harris here who are the openers so we've got some tough decisions to make. But tough decision are good decisions. It means there is competition for spots."

Wade now looks set to join either Burns or Harris at the top of the order, opening as he did for Australia in the Twenty20 series against India when he replaced Aaron Finch as captain for a game due to a Finch hip injury.

"He's got good footwork, he's got the game for it, he can counter-attack like David Warner," Langer said. "Like a lot of the great openers do, they don't just have strong defence but they counter-attack as well. He can definitely do it. We've just got to work out what the best make-up of our team is going to be."

Langer said Wade had become Australia's "Mr Fix It". "He's so well regarded. He was the vice-captain for a couple of games when Pat [Cummins] was away in the white-ball team," he said.

"He's very tough mentally and physically, he's got a great attitude to the game. He's an unbelievable team man. He's a very, very important part of our team."

Related posts:
MLB News:
Packers vs. Buccaneers live score, updates, highlights from NFC championship game
Sources: Yanks land Taillon in trade with Pirates
Jim Caldwell is laughing at the Lions
Deadspin NFL Over/Under Bet of the Week: Trusting the defending champs
Basketball News:
Golf legend Greg Norman breaks silence on giant bulge photo while walking dog
Why is the Warriors’ starting lineup so bad?
Green tossed after appearing to yell at Wiseman
Recent Posts
This website uses cookies to improve your user experience and to provide you with advertisements that are relevant to your interests. By continuing to browse the site you are agreeing to our use of cookies.Ok