A rib eye on the bone at The Little Hunter steakhouse will set you back $58 – small change next to the Test match that Pat Cummins sensationally missed after being deemed a close contact under South Australia’s COVID-19 regulations.

Australian cricket is walking a COVID tightrope once more after Cummins was ruled out of the Adelaide Test as one of the indoor diners all required to isolate for seven days under the protocols determined by SA Health.

Cummins, who was dining with his state teammate Harry Conway inside the restaurant, was unable to play in Adelaide despite being double vaccinated and returning a negative PCR test result on Thursday morning.

By contrast, Nathan Lyon and Mitchell Starc dined outside at the same restaurant and were free to take their places in the team led by the vice-captain Steve Smith in the second Ashes Test. 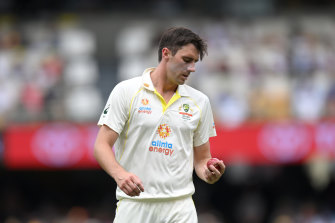 Pat Cummins is out of the second Test in Adelaide after being deemed a close contact of a patron who had tested positive to COVID-19.Credit:Getty

CA and the England board are at pains to avoid a repeat of tight bubble restrictions for players, after the mental health toll taken by COVID protocols over the past two years. But they must equally weigh up the risks of losing more players under similar scenarios, described by one source as a “nightmare” for the governing body.

“We’ve got protocols that flex according to the risk level of any different jurisdiction, so we’re looking at that every single day,” CA’s chief executive Nick Hockley said on Thursday. “I think we’re pretty comfortable that the protocols are what they are for South Australia and then we’ll keep monitoring the situation in Melbourne; we’ll monitor the situation in Sydney.

“Our protocols include that the playing group needs to dine in small groups, and in many ways they’re designed to mitigate precisely the risk we’ve seen unfold very unfortunately here in Adelaide. I think thankfully we’re all devastated that Pat’s unable to play in this Test match, but the protocols are working and we’ve only had one player taken out.”

Hockley was adamant that Cummins had not done the wrong thing, and also that CA would not be tightening the bubble for the two teams and match officials – most of whom have taken the chance to socialise outside their hotel this week.

Cummins was dining at the restaurant under protocols for both teams that allowed players to use their judgment when out in the community. They are permitted to walk around, shop, eat or have coffees, provided they stay away from particularly busy venues. A group of umpires and match officials were having a quiet drink outside an Adelaide pub earlier in the week.

“What we don’t want to do is completely lock down the players. We’re very conscious of taking a precautionary approach,” Hockley said.

“We’re very conscious of their mental wellbeing. What I can say is that Nathan Lyon and Mitch Starc dined in the same restaurant but outside and we’ve had it confirmed from SA Health that they were not deemed close contacts.

“Certainly our chief medical officer and our medical team will be working with the playing group, with the ECB and their medical staff to make sure over the course of the rest of the Test match and over the rest of the tour, that we’re mitigating the risk.

“I spoke to my counterpart this morning and everyone wants to see both sides with their full-strength best side out on the park. I think dining outside is a great way to further mitigate the risk.”

Asked whether the protocols had let Cummins down, Hockley said that a balance needed to be struck across the series. The third and fourth Tests are scheduled for Melbourne and Sydney, and the final match in Hobart.

“We always know that there’s a level of risk,” Hockley said. “I think we’ve just been extremely unlucky. Pat it’s just a case of wrong place, wrong time and I think if you look at the whole balance of managing wellbeing, the alternative would have been to lock everyone down completely for the whole tour, which we’ve learnt over the last 18 months that’s got other consequences in terms of mental health and wellbeing.

“Just a really unfortunate and really disappointing situation, and thankfully we’ve got great leaders to step up and step in … hopefully there’s a seven-day period and we’re back to full strength come Boxing Day.”

A shattered Cummins spoke on Twitter of his disappointment in missing the game.

“Gutted to miss this Test but really excited to see [Michael] Neser finally get his chance in the baggy green. He has done the hard yards and is a seriously skilful player. Super frustrating but COVID has thrown us all some curve balls over the last couple of years. Will be cheering along!” Cummins wrote.

Management of the restaurant, which has conducted a deep clean and was open on Thursday night, declined to comment.

On its Instagram page, The Little Hunter describes itself as “a premium steak and ale bar in the heart of Adelaide! You won’t regret it”.