The restrictions in place during the pandemic have been a source of tension for India, have forced players to be apart from their loved ones, and have now denied Will Pucovski's family the chance to be there for a once-in-a-lifetime moment.

Pucovski's parents and his partner were unable to make it from Melbourne for the baggy green presentation to the country's 460th male Test cricketer. 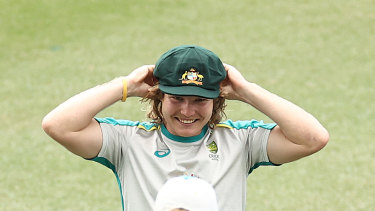 Will Pucovski was presented with his baggy green cap by Andrew McDonald.Credit:Getty

"Families are usually included in these ceremonies," McDonald said. "For those who aren't here, in particular [father] Jan and your little mate Harpsy, I'm sure they'll be on the phone looking on proudly watching the game and sharing the journey ahead of you."

"Harpsy" is Pucovski's longtime mate Sam Harper, the Victoria wicketkeeper who used to muck around with Pucovski while their fathers played for the Caulfield Cricket Club in Melbourne.

Harper and several of Pucovski's mates travelled to the Gabba two years ago expecting their friend to make his debut against Sri Lanka.

We've heard from several of Will Pucovski's junior coaches one of his strengths as a batsman is his powers of concentration at the crease. As a student, less so, as you'll find out from this anecdote, which, The Tonk is told, has become folklore at Pucovski's alma mater Brighton Grammar.

End-of-year exams are a big deal and taken very seriously at the Melbourne private school. Wearing the full school uniform, students are led into the assembly hall and read the rules and protocols.

Pucovski's year 10 history exam took place on day one of the first Ashes Test in 2013.

About halfway through the exam, his teacher Robert Shaw, in his invigilation duties, sees Pucovski's hand go up. Expecting a question on the American Civil Rights Movement under Martin Luther King, Shaw – the former Fitzroy and Adelaide coach and also uncle of Test captain Tim Paine – is asked: "Excuse me, Mr Shaw, would you have a score from the Gabba?"

Without batting an eyelid, Shaw replies: "I certainly would, young man. England 1-28, Cook caught Haddin bowled Pattinson 13. Carberry not out 12. Trott next man in."

Pandemic does not stop former PM

The reduced capacity at this year's Test has not stopped former Prime Minister John Howard from attending.

The renowned cricket tragic and wife Janette were in their customary position in the SCG Trust suite, along with former Test greats Steve Waugh and Alan Davidson.

Former NRL boss Todd Greenberg was on debut at the Test as a Venues NSW director while The Tonk would have liked to be a fly on the wall for any conversation between CA board member Richard Freudenstein and Foxtel chief Patrick Delany. 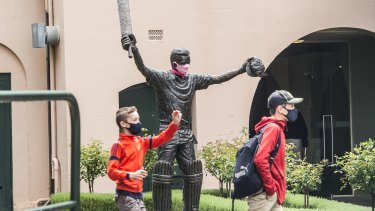 The statue of Steve Waugh fitted with a mask.Credit:Steve Siewert

There was a pandemic theme with the ground's famous statues. Our spies tell us Trust staff fitted Waugh and Richie Benaud with (pink) masks, which are mandatory for all fans after an 11th-hour edict by the NSW Government.

David Warner is in his 85th Test and umpire Claire Polosak on debut, but the first woman to stand in a men's Test was not to be daunted.

Polosak, the fourth umpire in the Sydney Test, drew praise from former ICC umpires boss Simon Taufel for telling the superstar Australia batsman to move off the pitch during the warm-up. 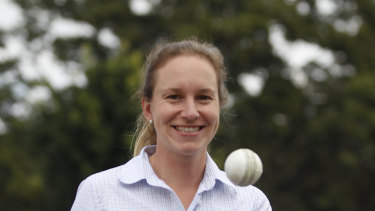 Claire Polosak is the fourth umpire in the third Test.Credit:Fairfax Media

"I did see early on in the telecast where she had the courage to tell Dave Warner before the match started to get off the pitch and do his shadow batting from behind the rope," Taufel said on Channel Seven.

"That showed a lot of courage and a lot of fortitude for someone in their first experience as a fourth umpire and a Test match."