Lawyers for Melbourne Cup-winning trainer Darren Weir will on Wednesday push to have his committal hearing relating to charges of conspiracy to defraud stewards and animal abuse held virtually. 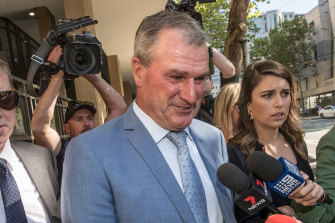 Among the accusations, it is alleged poly pipe and electric shock devices – known as "jiggers" – were used on horses Red Cardinal and Yogi at Warrnambool while they ran on a treadmill, wearing blinkers, in the days leading up to the Cup.

A two-day committal hearing at the Ballarat Magistrates Court had been set to start on September 8, however that was abridged to Wednesday for a special mention via Webex after lawyers for the accused were told a hearing in court would not be possible due to COVID-19 restrictions.

"They were going to vacate it. We asked them not to vacate the dates, we'd rather see if they could do it over the 'television', to use my term," defence lawyer Tony Hannebery said.

"The courts are so far behind. They just can't accommodate five lots of lawyers, witnesses, magistrates, court staff – it's purely COVID reasons.

"Let's hope we can preserve the date and keep it going."

A magistrate is yet to determine whether there is enough evidence from the prosecution for the case to proceed. If a virtual committal hearing can not be heard on September 8-9, it's likely the committal would not be heard in court before February next year.

Should there be enough evidence to proceed, Hannebery said a trial would unlikely to be held within the following 12 months.

The special mention, set to run half an hour, is scheduled for 2pm.