Weight-for-age champion Verry Elleegant will carry 55 kilograms in this year's Melbourne Cup, the most a mare has carried since Makybe Diva, if a Racing Australia website glitch is anything to go by.

Handicap ratings for nearly all 174 Melbourne Cup entries became widely available on Racing Australia's website on Tuesday, despite the weights not due to be released by Racing Victoria's chief handicapper Greg Carpenter until next Tuesday, September 8. 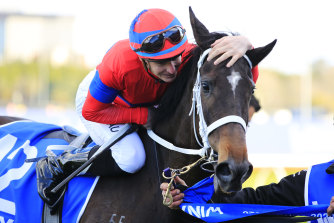 Among the ratings, which will allow punters to calculate what weights horses will carry on the first Tuesday of November, the Queen Elizabeth Stakes runner-up has been assigned 55kg.

Caulfield Cup winner Jameka carried 54.5kg in 2016, but finished 13th, while Magic Wand carried 53.5kg last year. Verry Elleegant was allocated 52kg last year as a four-year-old mare, but did not run in the Cup, and has since gone on to win two group 1s and finish second in three others.

But some punters would have expected Verry Elleegant to be allocated more for her autumn success at the weight-for-age level. Japanese mare Lys Gracieux was allocated 57kg for last year's Melbourne Cup, prior to her Cox Plate win.

However, part-owner Brae Sokolski said 55kg was a weight that made the Cup an enticing prospect for Verry Elleegant.

"I would say to you that's bang on what my expectation was," Sokolski said, when asked how he felt about 55kg.

"Our analysis brought out that that's probably the fair and equitable weight for her. Given that's our expectation, we'd be looking to forge ahead."

Connections have yet to settle on a jockey for the mare, with James McDonald's availability for the Melbourne Cup carnival still in the air. 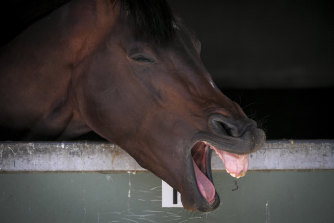 The Melbourne Cup weights are subject to change in the next week as Carpenter finalises the order of entry.

Also in the weights published on Racing Australia, Danny O'Brien's star colt Russian Camelot has been allocated 53.5kg, taking into account a 1.5kg allowance for being a northern hemisphere-bred three-year-old.

Santiago, Aidan O'Brien's Irish Derby winner, has been allotted the same weight as Russian Camelot. Northern hemisphere-bred three-year-olds have won two of the past three Melbourne Cups, while Il Paradiso was unlucky not to make that three straight Cups last year.

Tiger Moth, Mythical, Degraves, Dawn Patrol and Cormorant – five other northern hemisphere-bred three-year-olds trained by Aidan O'Brien – have not yet been allocated their benchmark ratings, along with horses such as Kinane and English King.

Aidan O'Brien's Epsom Derby winner Anthony Van Dyck has been allocated top weight at 58.5kg, from Avilius, Sovereign and last year's Melbourne Cup winner Vow And Declare, all on 57kg, while Master Of Reality (56kg) and Regal Power (56kg) will also be guaranteed a start in this year's race should connections choose to run.

Those horses on the cusp of the top 20 that are expected to run in this year's Cup include Prince Of Arran (54.5kg), Constantinople (54kg), and Surprise Baby (54kg).

Surprise Baby is a $9.50 equal-favourite with Russian Camelot via Sportsbet to win this year's Melbourne Cup and trainer Paul Preusker has deliberately not raced the talented stayer in an attempt to keep his weight down for this year's race.

Ashrun, who burst into Melbourne Cup calculations after being purchased by Australian Bloodstock over the weekend, will carry a very manageable 53kg if he can gain a start in the race.