Ashton Turner has survived a huge batting collapse and some Rashid Khan sledging to power the Perth Scorchers to a thrilling three-wicket BBL victory over the ladder-leading Adelaide Strikers.

In reply to the Strikers’ underwhelming total of 7-133, the Scorchers crashed to 6-72 in the 10th over of Monday night’s clash at Optus Stadium in front of 26,211 fans. 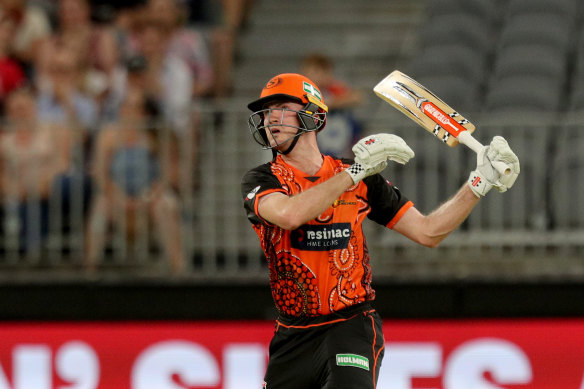 Ashton Turner of the Scorchers.Credit:AAP

A 43-run stand between Turner and Jhye Richardson steadied the ship, but things were still tense at the death with the Scorchers needing 18 runs off the final 10 balls.

Turner stepped up to the plate to deliver the killer blows.

He cracked a Henry Thornton full toss for six over long-on, followed it up with a four through point, and then carved the next ball for six over backward point to all but end the contest.

AJ Tye hit the winning boundary next over to secure victory with five balls to spare.

Turner finished unbeaten on 48 off 38 balls, with his knock featuring three fours and two sixes.

But he had to overcome some nervy moments during his rescue mission, especially when facing Khan.

Khan was unplayable at times on his way to figures of 1-15 off four overs.

Turner took a conservative approach when facing Khan, and the star Afghanistan spinner let him know all about it via several verbal exchanges.

“I just said, Test cricket is not here, it’s in Melbourne,” Khan said with a smile.

“I tried my best to create a kind of environment where he feels uncomfortable and tries to do something different. But he controlled himself, he didn’t do something silly.”

Turner took the on-field banter in his stride.

“He knows I have a lot of respect for him,” Turner said.

“He knows his job is to get me out, and he knows I’m not going to take many risks. Thankfully our bowlers did a job such that the required rate wasn’t escalating. It’s an easier proposition to try to see out his four overs than it is to try to whack them.

The result lifted Perth to equal top of the table alongside the Strikers and Melbourne Renegades.

The Strikers bowled the Sydney Thunder out for 15 earlier this month, and Adelaide produced another demolition job early in the Scorchers’ innings.

Josh Inglis (19 off 12 balls) momentarily eased the tension by blasting 18 runs off Thornton’s second over.

But when Inglis was caught and bowled by Ben Manenti and Aaron Hardie (22) was bowled by Short, it was 5-63.

Ashton Agar was the next to fall, but from there Turner took control, guiding his side to victory with a special captain’s knock.

Earlier, Strikers dangerman Chris Lynn top scored for his team with 35 off 34 balls before being run out by a direct hit from Jason Behrendorff.

Andrew Tye picked up some late wickets to finish with 3-30, while Jhye Richardson (0-20) and spinner Peter Hatzoglou (0-22) were economical without reward.

The Morning Edition newsletter is our guide to the day’s most important and interesting stories, analysis and insights. Sign up here.