Richie Porte says an interruption to the Tour de France due to the coronavirus pandemic would be a "disaster" as all riders and staff from teams competing await test results.

Race organiser ASO has enforced strict protocols for the delayed 107th edition of the race and, as part of that, any team that returns two or more positive tests stands to be ejected from the event.

The results from mandatory tests taken on Monday's first rest day are due to be announced before the start of stage 10 on Tuesday. 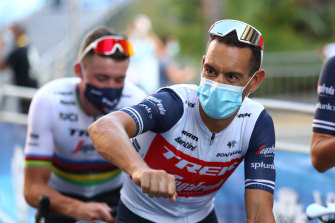 Porte (Trek-Segafredo) has undergone two COVID-19 tests at the Tour, the first in Nice, where the race started, and then on Monday morning. The Australian, speaking during the rest day, said he hoped reservations he had before the race about the Tour not making Paris, wouldn't be realised.

"After Nice there has been a lot more people on the side of the roads, watching. You're still coming into contact with people in hotels that aren't inside the bubble," Porte said.

"We're doing everything we can, and fingers crossed we can make it to Paris because it would be a bit of a disaster if something like that happens.

"The numbers are there too, you know, the pandemic is only getting worse here in France but we're doing everything in our power anyway to be as careful as we can."

Porte sits 11th on the general classification – one minute and 53 seconds adrift of race leader Primoz Roglic (Jumbo-Visma) – after nine stages including a stint in the Pyrenees.

The 35-year-old lost time when he was caught out in crosswinds on stage seven but has otherwise remained in touch with the key title contenders in what is being billed as the hardest Tour in years.

"To be honest I feel pretty relaxed, which is the way to be. I guess we have to get through the second week but when we get to the Alps, you know, being a minute or even two minutes [down], it's not the worst thing," Porte said.

"I mean even [Tom] Dumoulin, who is at three minutes [and 22 seconds], it's not over for him either. They [Jumbo-Visma] could still use him as a tactical card. I think that last week is so difficult that, you know, the GC race is definitely not over and done with yet."

Stage 10 runs along the Atlantic coast and while it, on paper, suits sprinters, there is a strong chance of crosswinds that could again potentially influence the general classification.

"We've seen the final 40km and it will be winds somewhere and small roads, quite technical with roundabouts and road furniture everywhere, so tomorrow [Tuesday] is definitely a crucial day to get through as well," Porte said.

"I think we need to get through the next two days as good as possible.

"We were caught out on the crosswind day [stage seven] but then when you look at it, we didn't have Mads [Pedersen] and Edward Theuns up the front, so hopefully the next two days with those guys being there we should have a few more strong, capable guys to help.

"That's probably our strategy really, take it one day at a time and get through these stages.

"I know the weekend is going to be hard here but for me really it's one day at a time and see how we come out of the rest day, get through tomorrow. There is no real specific plans in place just yet."