Tricky opener over the mile to start. Like three-year-old filly 5. Stella Glow at the value stepping out to this distance third-up. Charged home from the back first-up in provincial grade before closing off only fairly last time in heavy going, but looking for more ground now and advantaged back on firmer footing. 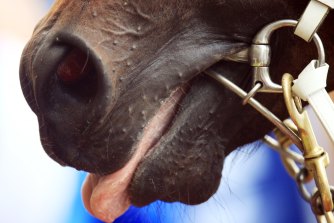 There is an eight-race card at Tamworth on Monday.Credit:Jenny Evans

Dangers: Improving local four-year-old 1. Cut ’Em Up has a task jumping from the outside barrier up 300m in trip fourth-up. Has worked home okay in his last two against deeper opposition, although would need to find cover early in the contest. Keep safe 7. Aldane who draws the inside with a drop in weight.

How to play it: Stella Glow to win

Keen on improving provincial three-year-old 5. Klinsmann at his second start from the inside draw. Was well-supported when working home from midfield first-up, and jockey change is significant.

Dangers: Home track four-year-old stallion 3. So Country is naturally a big threat after being narrowly and painfully beaten as a short-priced favourite in all three runs so far. Has the speed to overcome a wider draw, and blinkers going on is a key gear change. Keep safe promising three-year-old 6. Reggie’s Boy who resumes behind two strong trials, with a key gear change; while 7. Taking The Mikki has been close-up in two runs to start his career, and blinkers have been added.

Expecting highly-touted Shamus award three-year-old 8. Sherringford to explode on debut. Ultra-impressive in the second of two trials where he travelled in front before asked to lengthen; putting nearly six lengths on some very handy gallopers and could have won by more. Drawn off the track, but love the fact he’s starting over 1200m and not 1000m.

Dangers: Home track three-year-old 7. Roussas has shown steady improvement this prep, and gets blinkers applied third-up. Big watch too on local four-year-old 4. Tintern Power first-up with blinkers added off a nine-week break and quiet trial. Resuming colt 6. My Diamond Boy resumes from a soft draw, and another one sporting blinkers for the first time.

How to play it: Sherringford to win

Another promising one who emerges from the trials for a second-prep, Foxwedge filly 8. Abuela is smart and the one to beat. Competitive in two starts through winter before being spelled, and looked in total control winning a provincial trial. Scratching of the stablemate who ran at Taree on Sunday is another pointer.

How to play it: Abuela to win

Plenty of chances in this one headed by improving five-year-old 3. Castlebar Road who ran out of condition late when resuming, but the run was good, and he normally holds that form into his next start.

Dangers: Consistent five-year-old 5. Unrestricted will roll forward coming back in trip; while 2. Remorseless and 6. Kanalaide who both resumes go into all exotics.

How to play it: Castlebar Road to win

Typical open affair for this grade. Like improving local five-year-old 6. Onemorechoice second-up with a 2kg claim at big odds. Worked home nicely from well back in similar grade here, and three of his four career wins from 26 starts have come over this distance.

Dangers: Improving five-year-old 4. Fanmalia resumed with a smart win in weaker company, and three of his four career wins have also been over this trip. Trained on the track, 1. I’m On Break is a tough five-year-old who came off a sharp trial to produce his best win third-up and five weeks between runs ahead of the top selection. Out in distance, but will roll forward and still hasn’t been completely nailed by the handicapper after the claim. Watch for 2. Brother Bassy to bounce back on firmer ground after a rank failure in the Mudgee Cup; while 11. Barellan Bandit is included in exotics.

Promising four-year-old mare 11. Majority can make it two straight wins at this track third-up. Swept home to beat a handy BM 58 field here three weeks back, and remains on the same weight, only half kilo over the limit.

Dangers: Progressive five-year-old 8. Surf Sonic has been given four weeks since a flat run in provincial company, but has trialled smartly since and blinkers have been removed. Include both 1. Single Crown second-up via a forward trial; and 3. Vanbari first-up behind two trials; in exotics.

How to play it: Majority to win

Loved how lightly raced home track three-year-old 5. Ostracised hit the line resuming at Scone, and while this is tougher, he’s full of promise and apprentice hoop gives way to the Raging Bull.

Dangers: Progressive filly 8. One Penny is the immediate threat shooting for three straight wins this prep. Has the tactical speed to off-set a tricky draw, and well-placed again at same weight and trip. Gap to the rest headed by local four-year-old 11. Taketheshot who resumes from a soft draw with blinkers added.

How to play it: Ostracised to win