Tiger Moth has the potential to win an Irish St Leger, which might make a return to Melbourne for next year's Cup unlikely, Aidan O'Brien's travelling foreman TJ Comerford said.

The lightly raced Coolmore stayer has already been established by bookmakers as favourite for next year's Cup after running second to Twilight Payment on Tuesday. 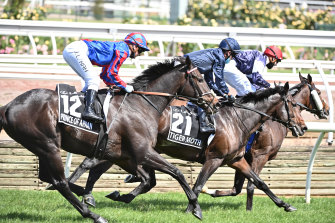 The last horse to win a Melbourne Cup after placing in the previous year's race was Fiorente in 2013.

It was a year of near misses for the O'Brien team, which was compounded by the deaths of Anthony Van Dyck and Wichita and the retirement of Magic Wand.

"I thought coming here we had great chances, which we did and I thought we'd definitely win one, if not two of them," Comerford said.

"I suppose we thought we'd get quick ground for Anthony Van Dyck for his first day [in the Caulfield Cup] but the wide draw and the whole thing didn't go to play. With the top weight he ran a blinder.

"Armory the next day [in the Cox Plate], ground was a bit soft for him. He got beaten by an ex-horse of ours [Sir Dragonet] who we knew was a good horse, we always knew he was a good horse.

"But we ran well and finished second.

"And the Melbourne Cup, we were again second [with Tiger Moth] to Joseph for the second time. These things happen. Kerrin gave him a great ride from the wide draw."

Armory shaped as a likely Mackinnon Stakes contender following his runner-up finish to Sir Dragonet in the Cox Plate, but the team flew out on Wednesday night and Armory will likely run in next month's Hong Kong Cup, the same race Magic Wand placed in after winning the Mackinnon.

"At the same time, he's a horse for next year," Comerford said.

"His back end of the season has been much better than the beginning. He ran a good race here on ground he didn't like and when he got beaten by Sir Dragonet, it's a good horse to beat him, especially with how well he ran in the Melbourne Cup."