Sydney Thunder coach Trevor Griffin is adamant his batting order will click sooner rather than later, with his defending champions now the only WBBL team yet to have a win this season.

The Thunder slumped to their third defeat from four games on Tuesday after failing to chase the Melbourne Stars’ modest target of 108.

Opening batter Tahlia Wilson was removed for a duck on the third ball of the innings before youngster Phoebe Litchfield replaced her at the crease only to be dismissed for a golden duck.

The less-than-ideal start knocked the wind out of the Thunder and despite an impressive 44 from Deepti Sharma, they could only limp to a total of 96 runs after their 20 overs. The defeat leaves the Thunder on the bottom of the WBBL ladder.

The underwhelming batting performance was largely down to the bowling of Kim Garth, who finished her four overs with figures of 3-11. The Irish medium-pacer took three wickets for no runs in a blistering opening spell to leave the Thunder floundering at 4-12. Garth also sent down 19 dot balls – the most by a Stars
player in an innings in WBBL history. 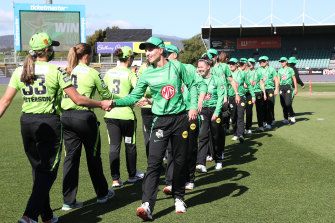 The Sydney Thunder were handed another loss on Tuesday after failing to chase a modest 108 target set by the Melbourne Stars. Credit:Getty

Despite his side’s collapse, Griffin is sticking strong with his batting order and said he would be working this week to instil more confidence in the top four.

“We need somebody in the top four to do the job, and the players understand that,” he said. “We review [our batting order] game by game and part of that depends on the situation, but from a combination point of view, I’m happy with what we’ve got.”

Griffin said he was confident his side would be able to bounce back quickly and find the form which took them to a premiership win last season.

“The vibe in the group is really good and positive. We’ve just got to keep giving confidence and encouraging them to play their game,” he said.

“From a batting side of things, there are some positives. We’ve only played three games. We just haven’t assessed the conditions and adjusted accordingly.”