Sports scandals age quicker than milk left out of the fridge, and by Wednesday morning, when the Ashes series gets under way in Brisbane, Tim Paine will be a name from the instantly-distant past.

The shock and schlock of Paine’s departure, the verbiage spent on it, and the curiosity about the new captaincy arrangement will have masked one important change in the cricket (as in, the game). Australia are likely to be a stronger team with Alex Carey at No.7.

At a time when likeability is at a premium, there is much to like about Carey, and not only because he, like his South Australian predecessor Barry Jarman and a host of other Test keepers down the line, was also a fine footballer. Carey is demonstrably more dangerous with the bat than Paine, with a first-class average four runs higher and a record of scoring centuries six times more frequently. As a gloveman, good judges (actual wicketkeepers) generally rate Paine the best in Australia, but Carey has done nothing to suggest he is going to be inferior, particularly given that his hands, neck and knees are six years younger.

Carey has plenty of international experience, having played as many white-ball fixtures for Australia as Adam Gilchrist had before his first Test match. At 30, Carey is only two years older than Gilchrist was on his Test debut. Until and unless his closet door falls open and skeletons fall out, Carey deserves the benefit of the public confidence that he is as solid a citizen as his coaches and teammates say he is. He may yet be the next Australian captain.

Changing a wicketkeeper reaches beyond a simple player substitution. It is the most fundamental change to any cricket team, and the fact that it happens so rarely attests to the almost superstitious belief teams and selectors have in wicketkeeping continuity. Get a new guitarist and the band goes on; get a new drummer, you have a different sound. Carey will renew the entire tone of Australia’s approach as much as the Patrick Cummins-Steve Smith duumvirate will renew the decision-making. After the stale, sloppy and predictable Test cricket Australia delivered into India’s hands last year, this is a change that England would have been less than thrilled to see.

A new wicketkeeper has always brought a wholesale renewal to Australian Test cricket. Looking back to the Second World War, when Don Tallon played for four years before losing his first Test match and never completed a losing series in seven years in the baggy green, the arrival of a new long-term wicketkeeper has more often than not ushered in a fresh era of team success. 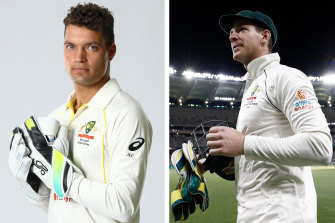 Alex Carey and Tim Paine. A new gloveman has often coincided with a period of renewal for the Australian Test side.Credit:Getty

After Wally Grout became keeper in 1957, Australia were undefeated in series for another eight years. When Rod Marsh was selected, Australia lost his first series but then went seven years before losing their next. Ian Healy had a rough first six months before drumming his team to a decade at the top of world cricket. Gilchrist, as gloveman, won his first 16 Test matches. Even Peter Nevill, who only had two years in the Australian team, won eight of his first 10 Tests and when Paine arrived as keeper, Australia won six of their next seven including four in the 2017-18 Ashes.

A change in the gloves, it seems, is even better than a holiday. The exceptions to the rule came after Marsh and Gilchrist retired, but in fairness to Steve Rixon and Brad Haddin, Marsh and Gilchrist walked into the sunset alongside entire generations of greats. As unpleasant as Paine’s departure was, it was perfectly timed for Australia in that he went out on his own, if not on his own terms.

It can’t be a coincidence that new wicketkeepers have so often been a breath of fresh air. The most persuasive reason I can think of is what precedes the big change. The best keepers are also, to a fault, stayers. They entrench themselves in a team, they are its heart, and are dropped only with the greatest reluctance. Often they are, as a show of respect, given an extra year so they can determine their own timetable for retirement (pretty much the opposite of, say, bowlers).

Those wonderful Australian keepers who enjoyed such success early in their tenure also played on into periods of decline, and the team’s cycles mirrored their own.

By the time Gilchrist got his chance, he was ready to explode. That is too high an expectation for Carey, but there are clear parallels.

Healy, for instance, was arguably the best wicketkeeper Australia has ever produced; yet it became obvious in hindsight that out of loyalty to an ageing champion, Australia missed out on a year or two of the dynamism of Gilchrist. Certainly by the time Gilchrist was given his chance, he was ready to explode onto the international scene.

That is too high an expectation to set for Carey, but there are clear parallels. Due to his captaincy, and the delicate balance he was seen to keep between the strong personalities around him, Paine was owed a debt of gratitude that he redeemed by prolonging his career by a year, and then another year. Who knows – it’s quite easy to imagine an alternative 2021-22 Ashes series where Paine comes under increasing scrutiny. Rusty batting, an occasional fumble, an iffy decision carry an added loading for 36-year-olds. Paine, as an older player with more recent rehab time than cricket time, was certain to be a target for England. By deciding not to play, he has spared his team and himself that fate. His was the right decision for off-field reasons; it might well turn out to be the best for on-field reasons too.

Under Paine, the Australian leadership had developed a house-of-cards fragility. He was seen as the key card at the foundation holding all those tensions together. This was another illusion. The house of cards was Paine himself, and the key card was inside his phone. Australian cricket will be the first to get over it.

All this has helped lift the Ashes out of the somewhat beige prospect it offered a month ago. The laddition of Ben Stokes to the England squad was a tonic, or maybe the splash of gin. Stokes’s presence makes each Test match a more active proposition. If humanity needed a cricket team to play Mars, Stokes would be the first earthling picked. England are a threat now.

Australia were revived by their win in the Twenty20 World Cup, which has added to their self-belief. It’s funny that for many Australians, the thrashing by England in their T20 World Cup pool game was irrelevant, yet the tournament victory was an important fillip for the Ashes. Never mind, it’s fuel for a fire that was sorely needed. The revelations of structural racism in Joe Root’s county and the Paine saga have given the contest the dramatic narrative undercurrents it seems to thrive on. And of course the end of the long COVID lull in Test cricket for Australia adds to the anticipation.

Though nobody would recommend it as a solution to a looming problem, the sad ending to Paine’s career should have a positive impact on Australia’s cricket. Carey is the new face that Australia needed. The scandal might have already receded into the background, but its fallout will shape the entire summer.