She’s the only Canberra-based runner at the meeting, and her trainer is prepared to travel 280 kms to maintain her smart second-up record.

Lightly raced five-year-old mare Temoin Chaud, trained by Nick Olive, tackles a good quality Benchmark 66 Hcp over 1400m at Tuesday’s feature Orange meeting, 23 days after she returned off a six-month break with a close second in the feature Belle of the South at Nowra. 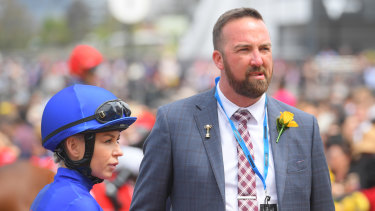 Already with four wins from only 13 starts, Temoin Chaud has won two from three second-up, and draws to get a lovely trail just off the speed.

She could well be pitch-forked into a two-horse war with promising Warwick Farm three-year-old Cinque Torri who has won two from seven, including a last-start dominant CL1 romp at this track.

And he’s from a stable that has no need to fix something that’s seemingly never broken.

Leading metro trainer Bjorn Baker saddles up yet another strong team at one of his most successful strike-rate venues in country NSW, having landed three from four at this track a fortnight back.

Apart from hard-to-beat Cinque Torri in that final race, Baker unleashes earlier with a three-year-old colt facing the starter for only the third time.

Tea Or Coffee, an emerging son of evergreen and prolific Snitzel, is well fancied from a low draw in a Maiden Plate over 1400m at set weights.

Just 12 days since sticking on well from the front in a deeper maiden at Hawkesbury, Tea Or Coffee looks primed, although he might have stablemate company in the run home, with Written Tycoon filly Little Miss Magic rating a serious chance also at her third start.

The stable then launches a double assault in a wide-open Maiden Hcp (1000m) with a pair of first starters in Nicconi filly Miss Nic’n Off and Winning Rupert filly Winnsom, the latter impressive in a recent Hawkesbury trial.

And Baker’s back with a serious chance in the penultimate Benchmark 58 Hcp (1000m) aboard tough three-year-old Rupertson returning to the venue where he overcame a wide run and plenty of challengers to win on debut.