Another spectacular rescue mission from Marcus Stoinis has kept Australia’s Twenty20 World Cup title defence alive and set up a sudden-death blockbuster against England at the MCG on Friday night.

The brutal all-rounder hammered 59 in just 18 balls with six sixes and four fours, making short work of a tense run chase against Sri Lanka as Australia won by seven wickets with 21 balls to spare at Perth Stadium on Tuesday night. 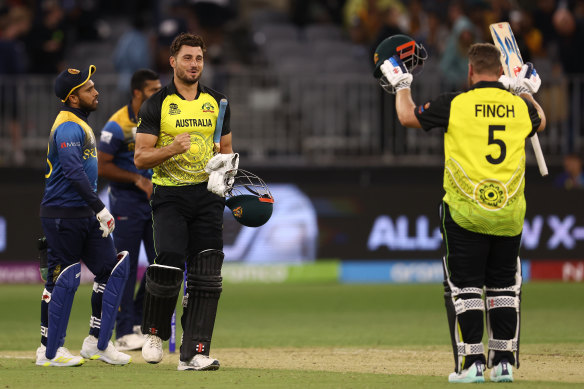 Captain Aaron Finch battled to 31 not out from 42 balls on the lively Perth pitch.

Having reduced Sri Lanka to 6/120 from 17.3 overs, some sloppy cricket by Australia allowed the tourists to reach a competitive 6/157, with 20 runs coming from the last over bowled by Pat Cummins, which included two wides and a poor last ball misfield from Finch which went to the boundary.

Glenn Maxwell suffered a terrible blow under the chin from a Lahiru Kumara short ball and looked to be seriously hurt as Maxwell dropped his bat, staggered away from the pitch and went down on all fours.

He eventually regained his feet and his composure only to be undone by another short ball, which has been the bane of his career. 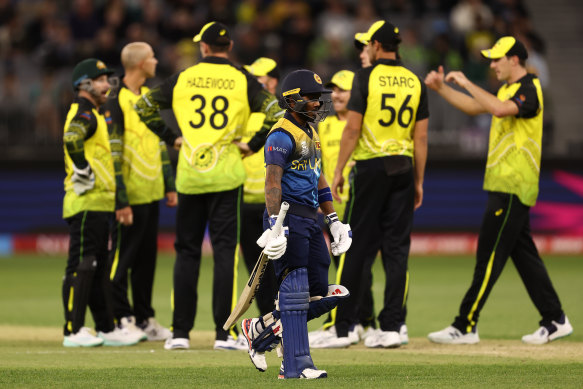 Pathum Nissanka of Sri Lanka walks from the field after being dismissed.Credit:Getty

This time Maxwell hammered a delivery from Chamika Karunaratne to the longest part of the ground at deep mid-wicket only for sub Ashen Bandara to take a wondered judged catch on the boundary.

The ball before Bandara had dropped a catch from a skied pull off Finch when he was 23.

Leg-spinner Adam Zampa was ruled out with COVID-19 in the one forced change to the side that lost heavily to New Zealand on Saturday night.

He was replaced by left arm tweaker Ashton Agar, who was playing his first game for Australia since both spinners played against Zimbabwe in Townsville almost two months ago, and his first T20 international since touring Sri Lanka in June.

Despite remaining in the team hotel, Zampa is expected to fly with the team to Melbourne on Wednesday.

Finch continued his happy knack of winning the toss and bowling, giving his pace attack first use of a hard and well-grassed pitch which offered early seam movement.

The dominance of seam over swing appeared to be the reason for a change in the opening bowling combination, with Josh Hazlewood taking the first over instead of Mitchell Starc and usual change bowler Cummins taking the second. 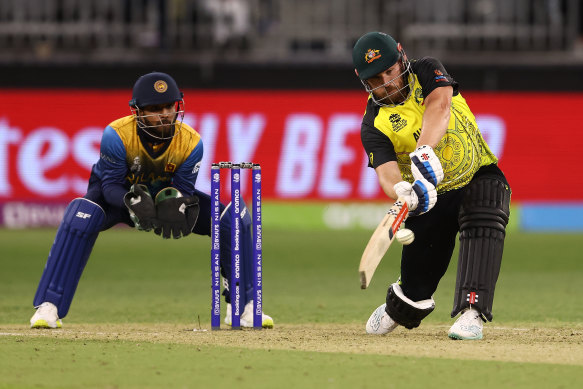 Aaron Finch gets a shot away against Sri Lanka.Credit:Getty

The change paid dividends almost immediately, with Kusal Mendis skying an ambitious pull from Cummins’ fifth ball to be caught at mid-wicket by Mitch Marsh.

The start was a vast improvement on Saturday’s effort against New Zealand in Sydney last Saturday, when New Zealand raced to 0-46 from the first three overs. Sri Lanka was 1/16 at the same stage.

But it was the only early breakthrough Australia managed as Pathum Nissanka and Dhananjaya de Silva built a 69-run partnership batting in unfamiliar conditions.

David Warner ended up catching de Silva twice. One was a brilliant, diving effort running from the fielding circle to long off, when he propelled himself full length, caught the ball in the air over the boundary rope, and flicked it back into the field of play before landing.

An over later Warner ran around from long off to deep cover to take a fine, well-judged catch off a lofted drive by de Silva from Agar to depart for 26 from 23 balls.

When Nissanka was run out for 40 from 45 balls in a dreadful mix-up, Sri Lanka suffered a collapse, losing 4/23 before a late flurry from Charish Asalanka, who made an unbeaten 38 from 25 balls.

The Australians took some well-judged catches but Cummins made a meal of a simple chance at deep square leg off the third ball of Marsh’s first over since returning from an ankle injury.

It followed his warning of England white ball captain Jos Buttler during a T20 match in Canberra earlier this month, when be referenced Indian spinner Deepti Sharma.

There was an outcry last month when Sharmna ran out England’s Charlie Dean at the non-striker’s end, which is referred to as a Mankad, to help India secure a 3-0 series whitewash.