Mitchell Starc took on Andre Russell and won, bailing Australia out of jail with a clutch final over to extinguish any danger of a Caribbean whitewash.

It has taken until game four of the T20 series but Aaron Finch’s men are finally on the board – but only after holding off a late charge by the West Indies to scrape home by four runs. 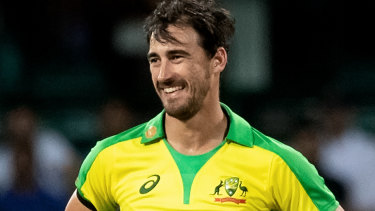 Mitchell Starc had just 11 runs to play with in the final over but bowled five straight dots balls.Credit:Getty

Coach and selector Justin Langer still has several holes to plug in the XI but, with just four victories from Australia’s past 14 games before today in this format, he will take any win he can get with a World Cup just months away.

Even though it came in a dead rubber, the gusto with which Starc celebrated the narrow escape showed how much this game meant to the Australians, who successfully defended their total of 189.

It was far from the complete performance, but enough. Just. Despite the strong platform provided by player of the match Mitchell Marsh and Aaron Finch, the middle order was again tied down, managing just 58 runs form the final eight overs, and the lack of spin options late almost cost them the game.

Speedster Riley Meredith, in his fifth match, was hammered for four sixes by Andre Russell and Fabian Allen in the penultimate over of the game, leaving Starc just 11 runs to protect.

Meredith, though, struck a crucial blow with his final ball with the wicket of Allen – the importance of which became evident minutes later.

With two lusty blows enough for Russell, Starc’s margin for error was small. But he was up to the task, producing dot balls with each of his first five deliveries.

Russell, who clubbed a six off the final ball, may well be ruing his decision not to place more trust in his partner Hayden Walsh by declining the singles on offer.

“I thought he was world-class,” Marsh said of Starc. “Start of the over I was at short third man with Finchy. Those moments there, that’s the ultimate. Playing cricket for your country, Mitchell Starc versus Andre Russell, two of the best in the world at what they do. That’s why you play.

“We love that stuff. You’d like it to be not as close but that’s playing cricket at the highest level. Starcy really stepped up tonight, it was awesome to watch that last over.”

After conceding 89 runs from eight overs in his first two games, Starc has shown in games three and four why he is one of the best white-ball bowlers in the world. Two days ago he produced the most economical four-over return of his T20 international career, and his resolve in this game averted defeat.

“You always talk about his record, it speaks for itself,” Marsh said. “He may have had a slower start this series but he’s the best in the world and that moment tonight, we have a lot of young bowlers in our group who will look at that tonight and aspire to be like that. That’s great.

“He’s a great leader, he’s a great white-ball bowler so we’re very lucky to have him. It was awesome to watch that last over.”

Marsh has one foot on the plane to the World Cup after another impressive performance. Batting at No.3, the all-rounder crunched 75 off 44 balls, sharing in a 114-run stand with Finch, then claimed a career-best 3-24, including the wicket of the dangerous Lendl Simmons.