Steve Smith and David Warner may have to face the music from South African crowds next year, with cricket officials from that country aiming to welcome fans back for Australia's first Test tour of the nation since the ball tampering scandal.

South Africa's cricket boss Graeme Smith has declared Australia's slated tour next year is "not in doubt at all" despite the political turmoil within the board, and the country's struggles to contain the pandemic, which has claimed nearly 21,000 lives and infected more than 765,000 people. 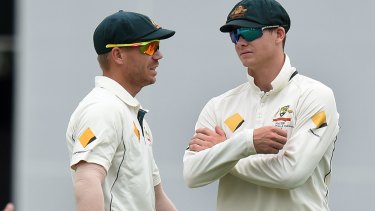 Cricket South Africa are aiming for crowds to be back in time for next year’s Test series against Australia, the first since the ball tampering scandal which resulted in Steve Smith and David Warner serving lengthy bans.Credit:AAP

Neither CA or CSA will want a repeat of the previous flashpoints, especially at a time when players are enduring the added strains of bubble life.

Smith, the former Proteas captain turned South Africa's cricket director, has moved to allay any fears of more poor crowd behaviour, saying fans, if doors are open, will be so pleased just to be able to attend they will not behave anti-socially towards the Australians.

"You can control it to the best of your ability. There's not a place in the world where there hasn't been a fan chirping or having a crack," Smith told The Sydney Morning Herald and The Age from South Africa. "That's part of playing sport at the highest level in opposition countries. We'll try our best to marshall it.

"I think South African fans will be grateful to have a quality team like Australia playing. It's been one of those crazy periods where things we've gotten used to have been taken away from us.

"We're kind of looking at the Australian series, hopefully if all goes well with COVID, to have some crowds back in the stadiums. There'll be way more excitement around that than anything else."

Australia's limited-overs tour of South Africa this year occurred without drama after then chief executive Jacques Faul pleaded with local fans not to misbehave.

Smith said CSA and CA will hold more extensive talks over the next month to find a way through the logistical and biosecurity difficulties involved in organising a tour during a pandemic.

CA has indicated it wants the tour to go ahead and would send over its best squad despite the T20 series in New Zealand being held simultaneously.

Though there are no requirements to serve quarantine upon entering South Africa, strict biosecurity protocols are in place which do not permit England and Proteas squads and match officials to leave their hotel.

Smith is optimistic regulations can be loosened by the time Australia arrive next year, though the coronavirus situation will need to improve significantly.

"At the moment we're still hoping things relax, maybe the vaccine comes and new technology arrives," Smith said. "We haven't specifically talked about how that tour looks with CA but we will in the next month start engaging on that.

"They'll have expectations, we have expectations. Our goal is to work with CA to provide comfort with them that the tour can happen safely. By the time we get to March we will have hosted a number of international tours already. We expect to be fully into things by the time Australia get here."